Gold prices are likely to remain under pressure as it becomes increasingly evident that central bankers are ready and willing to sacrifice economic growth in the fight against inflation. At a conference in Portugal, speaking alongside chiefs from the European Central Bank (ECB) and Bank of England (BOE), Federal Reserve Chair Jerome Powell spoke of his hopes for a soft landing, but was clear that the bank’s main goal is fighting inflation even at the costs of slowing economic growth.

Central bankers would prefer to avoid a recession if they can. However, the war in Ukraine and resulting sanctions on Russia have inflamed already strong price pressures across the global economy. Meanwhile, consumer demand has remained strong in the United States through the summer months, likely due in part by pent-up demand from years of Covid-related restrictions. The Transport Security Administration’s data shows that the number of travelers through checkpoints—a proxy for airline passengers—has nearly reached pre-pandemic levels. That comes despite high airline ticket prices.

Moreover, the loose-handed stimulus doled out through the pandemic, which was likely a contributor to rising prices, is being continued, this time through state governments. California recently announced a round of stimulus checks to be distributed. Other states are also taking part in their own measures to relief taxpayers of higher prices, whether it be tax breaks on certain items, or their own stimulus checks. While well-intentioned, these measures risk further inflaming inflationary pressures, or keeping prices elevated for longer.

The end result from more spending among consumers can force the Fed’s hand into an even more aggressive position, potentially having to raise rates at an even faster pace. The Fed’s aggressive stance has sent breakeven rates tumbling in recent weeks. Tonight, the United States will see its personal consumption expenditures (PCE) data for May cross the wires. Analysts expect to see core prices, the Fed-preferred gauge that strips out volatile food and energy prices, cross the wire at 4.8% on a year-over-year basis. That would be down from April’s 4.9% y/y print. A modest overshoot may not be enough to spoke markets and send gold higher. Alternatively, if markets get a soft print, that may induce some risk taking, which would likely drag on bullion prices.

Gold prices are on track to fall for a third week following a move lower through the past few days. The 1,800 psychological level is just over 1% lower from current prices. Meanwhile, the falling 20-day Simple Moving Average has capped intraday moves higher this week. That said, a directional break in XAU is likely to come after prices make a clean break above or below those levels. 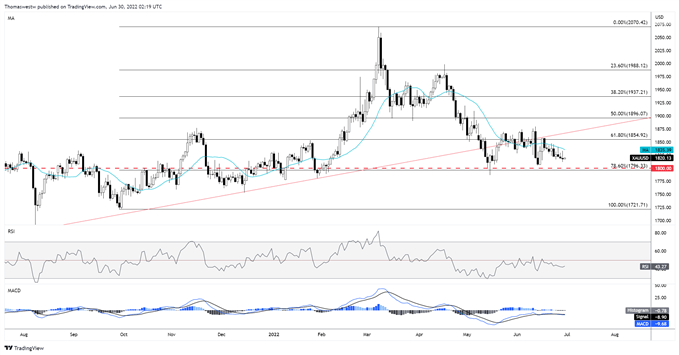