Gold prices fell into Tuesday’s Asia-Pacific trading session after peace talks concluded for the day between Ukrainian and Russian negotiators. While little progress was made, the negotiations are set to resume tonight, and hopes are rising over the prospect of ending the conflict. That hope is being reflected in the global financial market through a slightly risk-on tone. A ceasefire is the most immediate concession being sought from Ukrainian diplomats.

That slight risk-on tone weighed on gold prices, which have risen sharply since the war started. Some of the premium priced into gold was in response to an acute increase across commodity prices, which inflamed inflation expectations. That benefited gold’s inflation-hedging appeal. Commodities saw broad weakness overnight on a new wave of Chinese Covid lockdowns, with oil prices falling more than 5%. Market-based inflation gauges dropped in response as traders ditched inflation-indexed Treasuries, pushing real yields higher to gold’s detriment.

The yellow metal may see more downside this week if talks between Ukraine and Russia advance. A ceasefire agreement would mark a significant achievement that would likely drag gold prices even lower. Traders will be monitoring the newswires on that front closely. Meanwhile, reports around Kyiv show that fighting has only intensified, and several more reports of civilian casualties have crossed the wires.

Gold traders will also be keenly focused on the Federal Reserve’s interest rate decision due out later this week. The FOMC is expected to hike its benchmark rate by 25 basis points in the first US rate hike since the Covid pandemic started. The committee’s updated economic projections, including its so-called “dot plot,” is another potential market mover. The concern over the Fed not doing enough to tamp down on inflation has grown in recent months, and a more aggressive dot plot or commentary from Governor Jerome Powell may help quell those fears. For gold, a surprisingly hawkish tone would likely weigh further on prices.

Prices are on the move lower, with the 61.8% Fibonacci retracement level shifting into focus as potential support. A break below that would introduce the psychologically imposing 1900 level. That comes within a week of prices piercing below the 2000 level. MACD crossed below its signal line overnight, which puts a bearish tone on the technical outlook. However, a rebound may see bulls attempt to recapture the 2000 level, but intermediate resistance from the 38.2% Fib is possible. 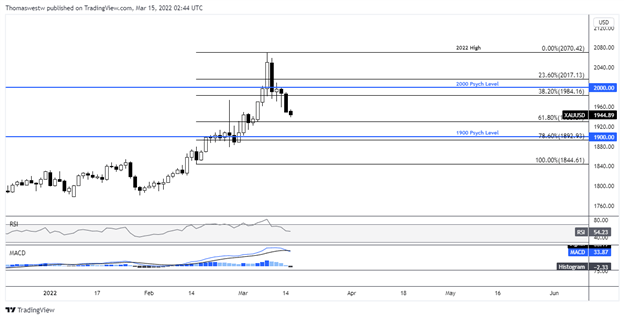