Gold prices held firm overnight despite a US Dollar that was charged on safe-haven flows amid a volatile New York trading session. US stocks managed to close in the green after a late-day rally, marking an impressive intraday turnaround. The broad risk aversion and volatility was the likely driver for bullion prices.

A healthy amount of buying in the Treasury market also helped gold by pushing yields lower across the short-end of the curve, while longer-dated yields trimmed losses as stocks rebounded. Bullion is sensitive to Treasury yields, as the metal is a non-interest-bearing asset. Treasury rates have risen sharply since early December, boosted by increasingly hawkish Federal Reserve rate hike bets.

However, those rate hike bets may have become too aggressive. An overnight auction of $54 billion in 2-year Treasury notes was met with strong demand on Monday in the United States. The auction saw the highest demand seen since early 2020. That suggests the hawkish bets calling for nearly four Fed rate hikes in 2022 may be overdone. This is a good sign for gold as higher demand for bonds raises the price. Bond yields fall when prices rise.

Bullion traders have a busy week ahead, with the Federal Reserve’s policy decision set to cross the wires on Wednesday. Federal Reserve Chair Jerome Powell may push back on some of the aggressive market pricing on rates during the post-FOMC press conference. Markets are currently pricing in nearly 100 basis points of hiking, which is likely more than the Fed is comfortable with currently despite the recent hawkish shift among even more dovish board members.

Later this week, the Fed’s preferred inflation metric, the personal consumption expenditures price index (PCE), is slated to drop. Analysts expect a reading of 4.8% year-on-year in the core segment of the price index for December. That would represent a small increase from November. It would also be prudent to keep an eye on the 5-year note Treasury auction tonight to help gauge overall bond demand. Another strong auction could help drive down rates on the shorter end of the curve. That would likely bode well for gold prices.

Gold prices rose from a newly establish level of support, which served as resistance numerous times going back to July 2021. The next target for bulls is likely the November high at 1877.15. The RSI oscillator is in neutral territory, while MACD strengthens. Prices may require a bit more consolidation before the next big push higher. Alternatively, a move lower would aim for a quick show of support from the former resistance level. 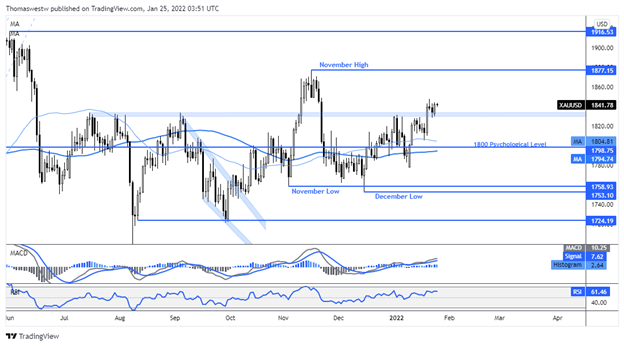