Gold is off to a bright start this week as the metal trims steep losses from the prior week’s nearly 2% selloff. The threat of a more aggressive Federal Reserve dragged sentiment across the precious metals group. While a more hawkish Fed rate hike path still looks likely, gold is benefiting from an outsized move in inflation expectations.

Market-based inflation expectations, via breakeven rates, began to rise this week. Breakeven rates measure the gap between a Treasury yield and its inflation-indexed (real rates) counterpart. A rise in that measurement is friendly for gold given its inflation-hedging appeal. The fact that gold is now rising in the face of higher rate hike expectations may show that the current outlook of three possible rate hikes this year is baked into market expectations.

That said, bullion traders expect a busy week ahead, with inflation data set to cross the wires for the two largest economies: the United States and China. However, the US data is more likely to provide a directional driver for the yellow metal since gold is largely priced against the US Dollar. Analysts expect the consumer price index for December to rise to 7.0% from 6.8%, while the core measure – which strips out volatile food and energy prices – is set to cross the wires at 5.4%, up from 4.9%.

The confirmation hearing for Federal Reserve Chair Jerome H. Powell’s renomination to lead the Federal Reserve may provide another outlet to move gold prices. Mr. Powell is likely to succeed in securing his renomination, but lawmakers are expected to grill him over the sustained rise in prices that were being referred to as “transitory” just a few months ago. While no big surprises are likely from the Fed Chair’s hearing, the chance he could throw the markets a curveball can’t be ruled out.

As previously mentioned, however, the market appears to have already largely priced in the increase in hawkishness coming from Fed members. That said, Mr. Powell may be careful not to reinforce those hawkish perceptions any further, which makes a bearish surprise for gold minimal. Governor Lael Brainard will testify for the Vice Chair nomination. Her confirmation is also likely to succeed. The White House is expected to announce a candidate to fill her soon to be vacant spot, as well as two other vacancies, in the coming weeks.

Gold is attempting to clear the 50-day Simple Moving Average after cleanly breaking above the psychologically imposing 1800 level. Major resistance around the 1830-1834 range that capped prices from July to September and again earlier this month remains the biggest near-term hurdle for bulls to clear. Alternatively, a break lower could see the 1800 level underpin prices, but an extended selloff would target the November and December lows at 1758.93 and 1753.10. 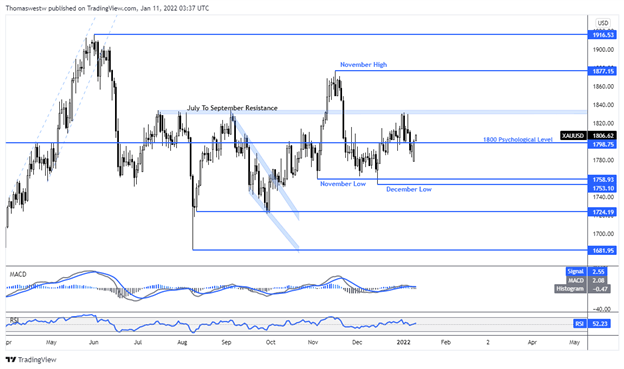