A report from the American Petroleum Institute (API) released overnight revealed a large draw in US inventory levels. The API saw crude oil stocks for the week ending December 31 fall by 6.43 million barrels. That was nearly double the figure analysts were expecting at -3.4 million barrels, according to a Bloomberg survey.

Oil traders are watching out for the Energy Information Administration’s data set to cross the wires tonight to confirm the data. Analysts expect that figure – also for the week ending Dec 31 – to show a drop of 3.34 million barrels. Gasoline and other fuel stocks will also come under scrutiny as traders evaluate how the holiday travel season affected stockpiles.

Moreover, oil bulls went on the offense after the Organization of the Petroleum Exporting Countries and its allies (OPEC+) pushed forward with its plan to increase overall production by 400,000 barrels a day for February. The group believes demand will continue to increase despite the new strain. However, some analysts do see an Omicron demand hit, with a Reuters poll released last week showing the consensus price forecast for this year falling 2% from the prior month’s consensus estimate.

Outside of the EIA inventory data tonight, traders will be watching the US non-farm payrolls report due out later this week to gauge economic strength. The consensus Bloomberg forecast stands at 424k, which would more than double November’s print. Elsewhere, factory activity increased in China, according to the latest Caixin PMI survey.

Crude oil prices are holding above a key trendline that appears to be serving as support once again following the late December rally. The 38.2% Fibonacci retracement also appears to be underpinning prices. A move higher will bring the psychologically imposing 80 handle into focus. MACD and RSI appear healthy, but the 50-day Simple Moving Average looks to be on course to cross below the 100-day SMA, a bearish signal. However, holding above the trendline will likely keep bulls in control for the time being. 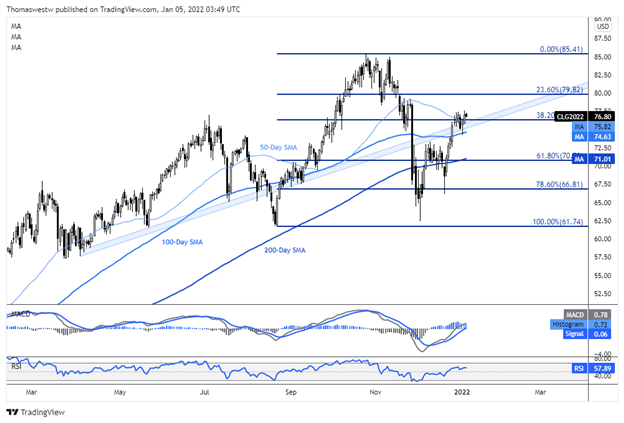