The Omicron variant is back in the headlines, and it's putting a big question mark over the global economic recovery. That weighed on oil prices overnight, with Crude and Brent benchmarks falling more than 1% overnight. One of the main drivers of bearish sentiment appears to be a study released Monday showing the Omicron variant evades vaccine protection from two doses of the Pfizer-BioNTech or Oxford-AstraZeneca vaccine. The University of Oxford study, however, suggests a booster shot can boost immunity.

Nonetheless, the news is a major blow in the global fight against Covid at a time when most developed countries were at or near supposedly sufficient vaccination rates. Moreover, news out of China added pressure on demand-sensitive commodities like crude oil. China’s CDC identified the nation’s first Omicron infection on Monday. A fresh wave of Covid in China has potential to derail the economic heavyweight’s recovery, which would undoubtedly drag on global sentiment.

Outside of Covid news, energy traders will have their eyes on API and EIA inventory data due out later this week. The most recent weekly storage report from the Energy Information Administration showed a large 2.4 million barrel inventory build in Cushing, Oklahoma. That put total storage at the main US oil hub above the 30 million barrel mark for the first time since October, and reduces the chance for any near-term supply shocks. If Wednesday’s EIA data shows a further build, oil prices are likely to move lower.

The EIA released a report on Monday suggesting that oil production in the Permian Basin will hit an all-time record this month. The report forecasts the oil field to hit 4.96 million barrels a day, above the standing 4.91 million barrels a day record from March 2020. That bodes well for higher storage levels in the coming months, particularly if demand growth slows amid the Omicron threat. Overall, however, oil bears appear to have the upper hand at the current moment.

Crude oil prices appear to be carving out a pennant pattern, with the preceding trend suggesting a possible bullish breakout. However, firm resistance from a descending trendline is in place, along with confluent resistance from the 20-day Simple Moving Average (SMA). MACD appears to have stalled out and is on track to cross below the oscillator’s centerline, a bearish sign. That said, the path of least resistance appears to be to the downside. 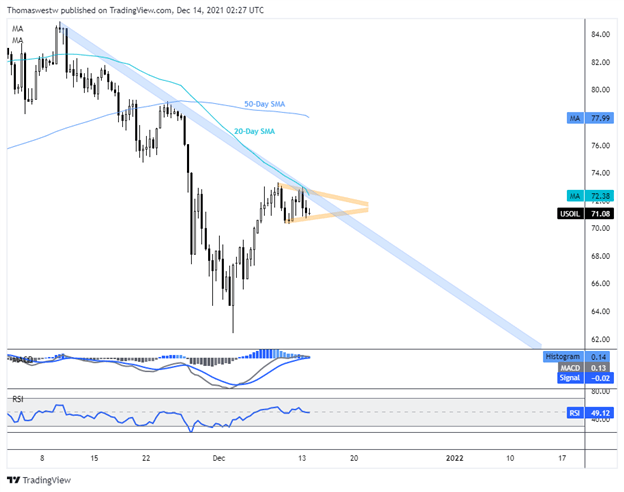