Oil prices collapsed in November, with WTI and Brent benchmarks putting in the biggest losses since March 2020. Crude oil fell over 20% last month, with much of the weakness coming in the last two weeks. The emerging Omicron Covid strain put a hit on demand prospects after several countries moved to block travel from South Africa, where the strain is thought to originate from. Prices are moving higher to start December, although there is now a large hole to climb out of.

The Omicron news comes at perhaps the worst time for oil bulls. Prices were already moving lower earlier in November on rumors that the United States was preparing to announce the release of stocks from the Strategic Petroleum Reserve (SPR). That announcement followed shortly after in a coordinated effort with other countries, including China and the United Kingdom.

OPEC and its allies, known as OPEC+, will meet this week to discuss whether to increase market supply by 400,000 barrels per day. However, given the recent Covid developments and sharp price drop, the cartel may opt for a more cautious route. Moving forward with the preplanned increase risks a further drop in prices. Analysts expect oil markets to move into a surplus next year as demand levels off amid increasing production.

The cartel must carefully balance its proposed production increases. On one hand, OPEC members want to keep prices high by carefully throttling supply, but keeping as tight a grip risks sending prices near $100 per barrel. That would likely fuel a shale boom in the United States, however, which would work against the group. On the other hand, being too loose with supply would likely tank prices. That said, a cautious approach is most likely. Oil prices are unlikely to rally until health experts better assess the current Omicron threat.

Prices are recovering today, but the technical outlook remains bearish given the recent breakdown. The 200-day Simple Moving Average (SMA) was breached after WTI pierced below a prior trendline. The RSI indicator showed prices moving out of oversold conditions, with MACD accelerating lower. The outlook, for now, remains bearish while below the 200-day SMA. 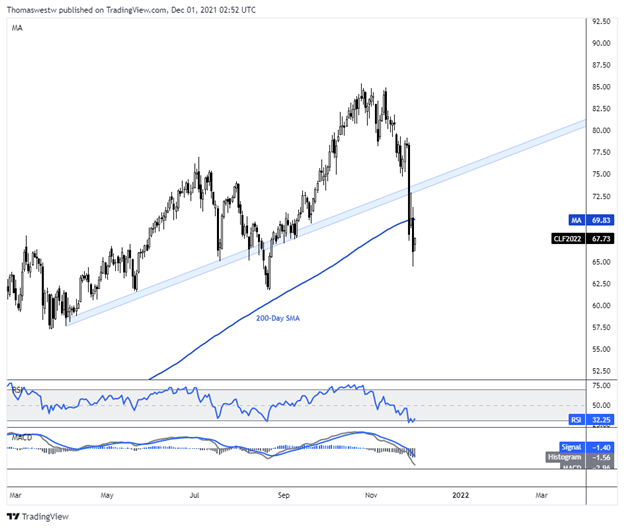