Crude oil prices are on track to drop nearly 2% this week as US production ramps up. The weak price action comes despite a smaller-than-expected draw in US oil inventories, according to the American Petroleum Institute (API). US stockpiles rose 655k barrels for the week ending November 12. That was less than half of what analysts were expecting at 1.55 million barrels and up from the prior week’s 2.485 million barrel draw.

Oil production continues to pace higher in the United States, particularly in the Permian Basin. The US Energy Information Administration’s Drilling Productivity Report released this week forecasts that domestic shale production in the Permian will hit an all-time record in December. Higher prices have encouraged more drilling, but other regions haven’t seen the increase in rigs. Overall, it’s a positive development on the supply side, but more is needed to help catch up with demand.

Political pressure on President Biden to release barrels from the United States Strategic Petroleum Reserve (SPR) has grown. Senate Majority Leader Chuck Schumer called on the President to tap into the US stockpile earlier this week, citing prices at the pump ahead of the holiday season. Such a release would cool prices, but the impact would be short lasted, likely only two or three months. That could, however, give production time to close the gap with rising demand.

Meanwhile, traders will be keyed into the upcoming US inventory report from the EIA. Analysts are looking for a build of 1.4 million barrels for the week ending November 12. That would be an increase of nearly 400k barrels from the prior week’s build. Storage levels at Cushing, Oklahoma, and exports will also come under scrutiny as traders evaluate the market’s dynamics. A build above the forecasted 1.4 million is likely to add pressure to WTI prices.

The overnight drop pierced through the psychologically imposing 80 handle bringing November’s loss north of 5%. Traders may look to the rising 50-day Simple Moving Average (SMA) for support. The November low at 78.25 is directly below the SMA. Dropping below that level would likely put further downside on the cards. Alternatively, bulls will look to retake the 80 handle, but the level could turn to resistance and see a subsequent drop. 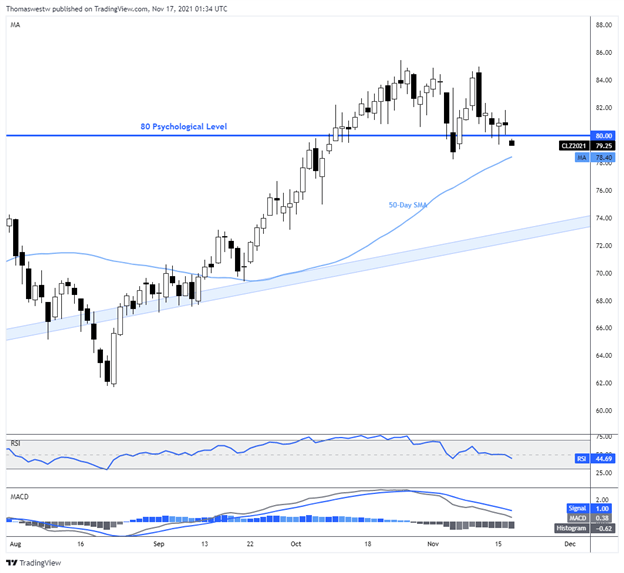