Crude and Brent oil prices are moving lower through the Asia-Pacific session as traders assess the potential for more supply coming onto the market via Iran, as well as building US inventories. WTI dropped nearly 2.5% overnight, although Brent managed to fend off lower prices until Asia began to trade. Brent is tracking a loss north of 2% in early Thursday trading.

A restart of talks between the European Union and Iran pressured prices as traders assessed the potential for more supply to hit the market. The negotiations are set to begin next month, although no exact date has been set so far. This could provide a segway for the United States to remove sanctions, which have severely throttled Tehran’s ability to sell its oil on global markets.

The political pressure on both sides has increased in recent months amid surging oil and energy prices. Iran’s economic capacity is limited, and a removal of sanctions would allow the middle eastern country to take advantage of oil prices that are at multi-year highs. At the same time, worries over those same high prices tempering economic demand and consumption are mounting. Policymakers in both respective countries therefore have a vested interest in getting Iranian oil back onto the market, at least to varying degrees.

A US inventory report added to crude oil’s woes on Wednesday. The Energy Information Administration (EIA) reported a 4.3 million barrel build for the week ending October 22. That was over double the consensus analysts’ estimate, and nearly 5 million more barrels than the prior week. US imports increased alongside a drop in stockpiles at Cushing, Oklahoma – the country’s primary storage hub. That indicates robust domestic demand, which is likely to continue given the current economic rebound’s calculus.

Crude oil is on track for a second day of losses, with prices nearly 2% lower currently. The rising 20-day Simple Moving Average is set to be tested after the 9-day EMA was pierced alongside the 23.6% Fibonacci level. Further weakness would put the 38.2% Fib and 80 psychological level on the table.

The MACD oscillator is on the move lower after breaking below its signal line. RSI is also indicating weakness. For now, the short-term technical outlook appears set for more downside, although the broader trend is supportive. 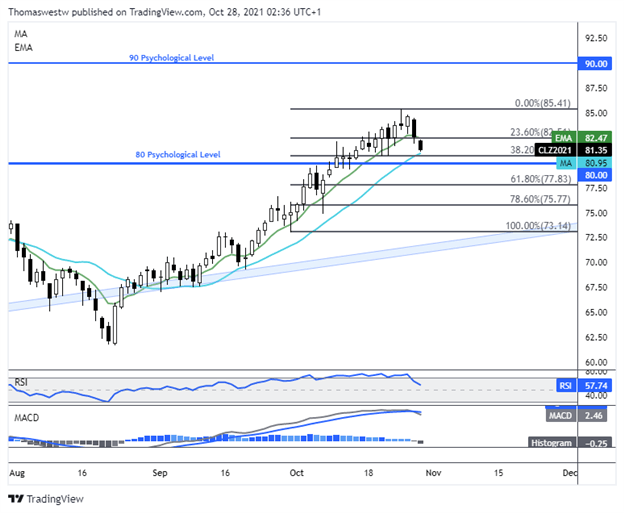