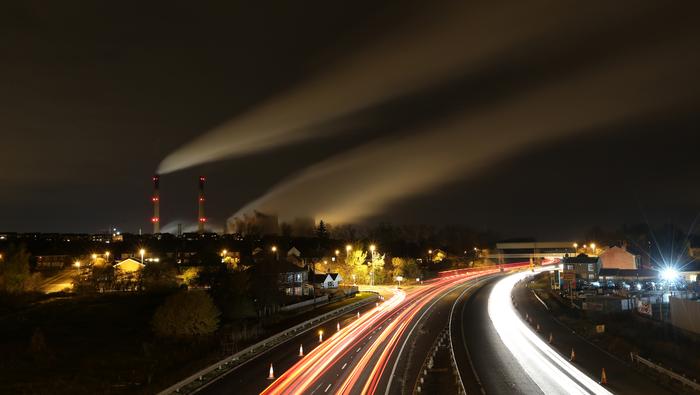 Copper prices took a hit early this week as the US Dollar surged. A broad risk-off move in global financial markets sent traders into the Greenback, which provides liquidity in uncertain times. The underlying cause for the broader move also has negative implications for the red metal specifically. Traders are bracing their portfolios against another wave of Covid, this one driven by the highly transmissible Delta variant.

Initially, traders were largely unfazed by rising Covid cases, both in the Asia-Pacific region and the United States. However, as lockdowns and social distancing measures ramped up as governments responded to the new threat, fears about an economic slowdown appeared to permeate into market sentiment. Lockdowns are particularly toxic for economic activity. China, Australia, and most recently, New Zealand have all come under lockdowns in the past couple of months.

China, a country that takes a strict approach to Covid outbreaks, reported some gloomy economic data at the start of this week. According to the DailyFX Economic Calendar, fixed asset investment, industrial production, and retail sales all missed expectations for July and slowed from the month prior. That set the tone for copper trading this week. Slower economic growth translates to lower demand in the economy, which bodes poorly for the industrial metal.

Supply-side issues were brewing for copper prices as workers at the BHP-operated Escondida site – the world’s largest copper mine—were threatening to strike. However, the union representing the miners announced late last week that it reached an agreement with the Australian-based operator. The deal removed doubt about any near-term supply chain issues for the metal.

Natural gas prices are mostly unchanged this week, following the largest one-week price drop since February last week. The stronger USD may be capping the upside, as a stronger Greenback makes purchasing the commodity more expensive. That could pressure export volumes of liquified natural gas (LNG).

Elsewhere, a US regulator declared a tier-one emergency for the Colorado River's water level, the first in history. The river in the Western United States sources from Lake Meade, the largest water reservoir by volume in the US. It has been draining at a near-exponential rate, and is now at only 35% capacity. The cause is a multi-year drought that has sapped the region of vital rainfall.

Dams control the flow of water from these reservoirs. Energy is created when water passes through the dams, which then passes through generators. Less water released means less power. That may see a higher reliance on natural gas as an energy source in the region going forward. The US Bureau of Reclamation predicts that energy production may fall up to 2.5% on a year-over-year basis over the next 5 years at the Hoover Dam. 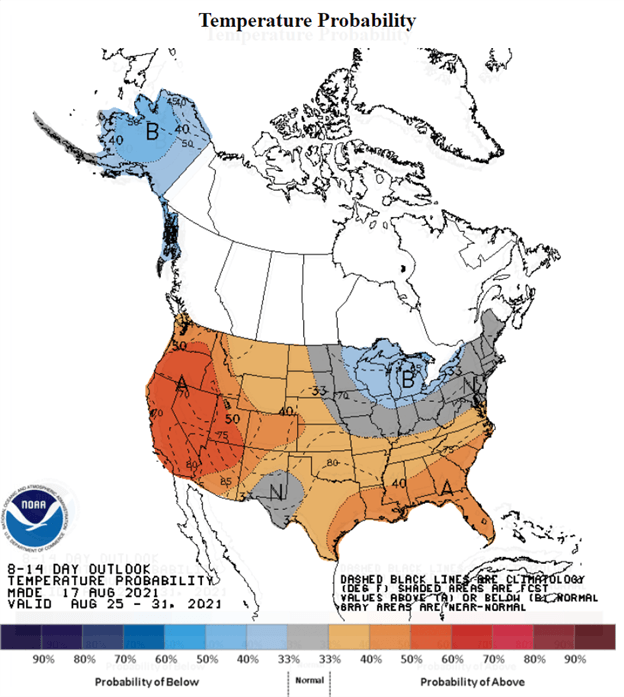 Copper prices broke through a trendline from February on Tuesday, which puts a bearish tilt on the short-term outlook. The 78.6% Fibonacci retracement from the June low to July high appears to be providing some support, however. Bulls will have to recapture the trendline to put prices back on a solid footing. Alternatively, further bearish action may see the rising 200-day Simple Moving Average shift into focus. 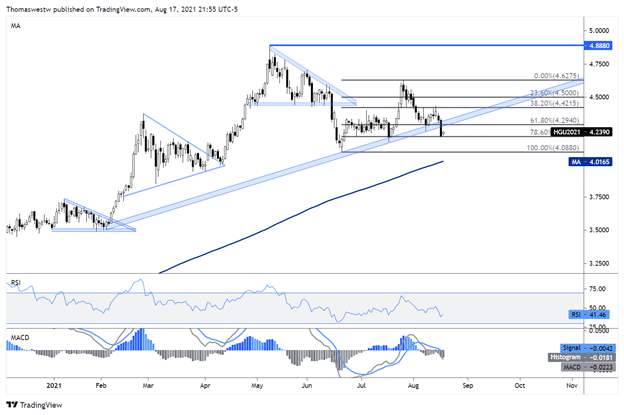 Natural gas prices are at trendline support following a drop earlier this week. Prices will drift higher if support holds, with multi-year highs within striking distance, which were reached just earlier this month. However, if the trendline breaks, it may put a bearish move on the cards. The rising 50-day Simple Moving Average may support prices to the downside. 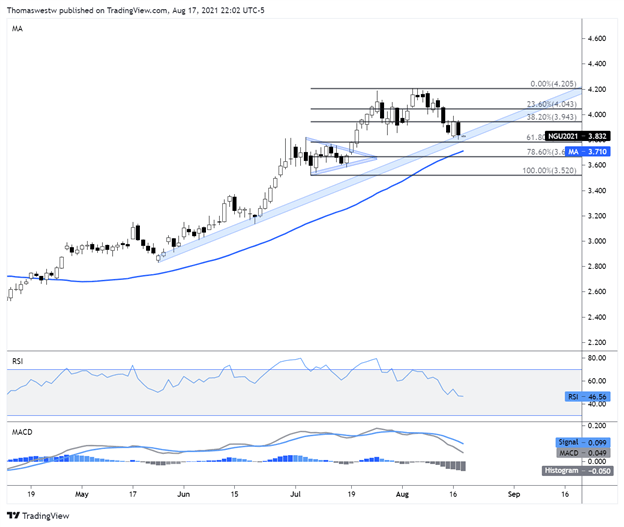