Gold prices have been on the up so far in July as the quickly-spreading Delta Covid variant is threatening to upend progress made in the fight against the global pandemic. The spread is seen as a direct threat to economic progress made thus far, with the potential for renewed lockdowns and social distancing measures, which will surely limit growth to a degree.

While the United States has so far managed to avoid any widespread lockdowns due to the strain’s spread – likely due to the advanced vaccination rate – other countries, such as Australia, have enacted lockdowns in their major cities. However, the Delta strain now accounts for over half of Covid cases in the US from June 20 to July 3, according to the Centers for Diseases Control and Prevention (CDC).

Rate traders have responded by soaking up US Treasuries. In turn, Treasury yields have dropped, with the benchmark 10-year yield down nearly 5% on the week, extending its prior week drop to put in the lowest level since February. The market’s expectation for a Fed rate hike has also suffered, which provides a tailwind for gold prices. The probability for a 25 basis point hike for the June 2022 FOMC meeting dropped from 28.5% to 19.2% over the past week, according to the CME Group FedWatch Tool. 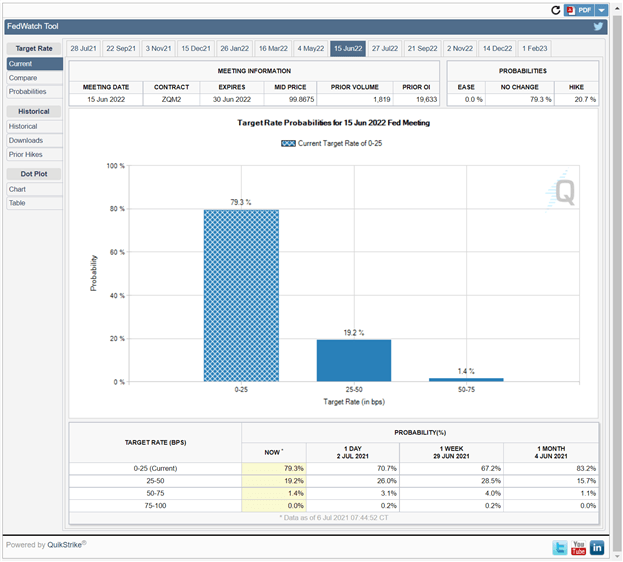 Gold is looking to record its seventh consecutive daily rise, aided by the drop in Treasury yields as of late. A recent breach above the 1,800 level has added a sense of optimism for bulls. The psychologically important level may turn support if prices turn lower. A break back below the level, however, may take the wind out of the sails.

A recent crossover between the 50-day and 200-day Simple Moving Averages (SMA) provided a bullish technical signal, which bodes well for sentiment in the near term. Moreover, the MACD line crossed above its signal line. Along with a rising Relative Strength Index (RSI), the technical picture has brightened considerably for XAU/USD. 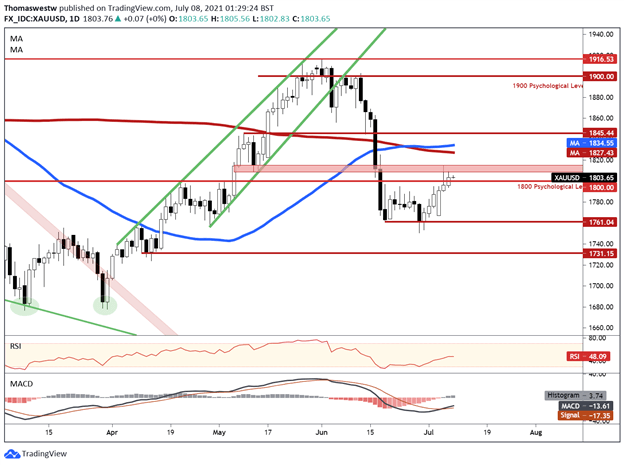 Silver prices have lagged gold recently, with XAG/USD failing to overcome the falling 20-day SMA. However, the MACD oscillator, like with gold, has recently seen a cross above its signal line. Upside resistance will remain eyed at the 20-day SMA, while support from the 200-day SMA – which underpinned price through late June – may stop a selloff. 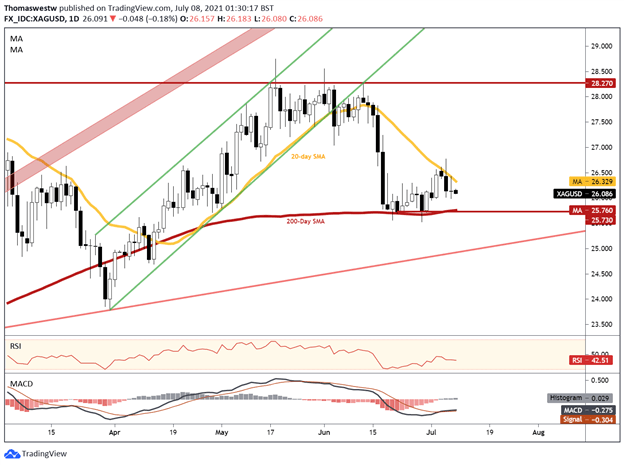