Gold prices corrected higher yesterday after touching the lowest level since mid-April in the prior session. That seemed to be triggered by news that the Covid-19 vaccine from Moderna was effective against the powerful Delta variant of the virus now forcing renewed lockdowns in some countries.

That seemed to cool concerns about lasting economic disruption, sustaining speculation that sooner-than-expected monetary tightening will undercut the appeal of non-yielding bullion. Prices have languished since mid-June, when the Fed signaled an upshift in its projected rate hike timeline.

Looking ahead, June’s US ISM manufacturing survey is in focus. It is expected to show that the pace of sector activity growth slowed for a third consecutive month. Analogous Markit PMI data links the cool-off to capacity constraints, including uneven supply chains and labor shortages.

Nevertheless, the expected headline reading at 60.9 would still amount to very strong performance relative to history. The trend average hovers in the 53-55 area. Looking back prior to 2021, the slowdown from March’s nearly 40-year high still marked the fastest manufacturing expansion since mid-2004.

Against this backdrop, inflation has continued to soar. The Markit survey flagged rising raw materials prices driving a record-setting rise in input inflation. What’s more, firms have not shied away from passing on higher costs to consumers, with final charges also hitting a historical peak.

ISM data that echoes this backdrop may stoke bets on an accelerated hawkish pivot at the Federal Reserve, month-on-month deceleration notwithstanding. That would stand to push front-end yields and the US Dollar upward, punishing gold prices further.

Still, it seems wise to consider that Friday brings the release of June’s official US jobs report. Traders will be keen to gauge payrolls growth and wage inflation, both of which are seen as key inputs into the Fed’s calculus. They may thus withhold directional conviction in the immediate aftermath of the ISM release.

Gold prices continue to mark time above support in the 1755-65 congestion area but positive RSI divergence warns that downside momentum has ebbed. While this may signal little more than a digestive period, it may also precede an upturn. 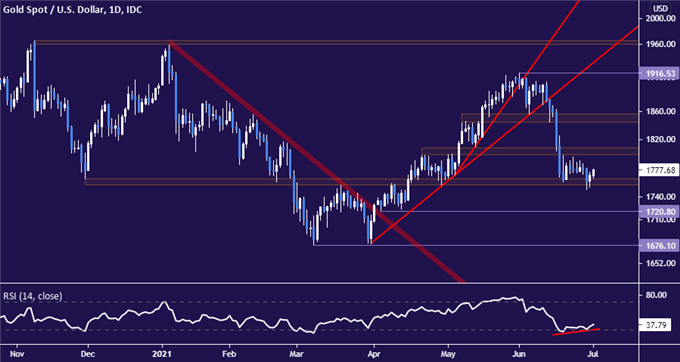