Silver is moving higher ahead of Treasury Secretary nominee Janet Yellen’s confirmation hearing before the Senate Finance Committee. XAG/USD is extending gains from Monday after falling to a fresh multi-week low. The weakness in silver prices through the opening weeks of the year was largely driven by US Dollar strength. The lull in precious metal prices had traders surprised given that the Fed is not expected to raise rates for years to come, which might have been expected to be supportive of gold and silver.

After several strong weeks of buying, the US Dollar now appears to be running out of steam. A weak Greenback is generally supportive of silver prices, and a softer US Dollar in the short to medium term remains the consensus view among economists. That said, the recent USD rally may have been the market correcting a move that appeared to get ahead of itself. In fact, CFTC data for the week through January 12 shows money managers increased short positions on the Greenback to levels not seen since 2018.

The shift back to a weakening USD helps silver prices, so Yellen’s testimony is understandably at center stage for market participants. The former Federal Reserve Chair is slated to be the 78th US Treasury Secretary, a position that will make Ms. Yellen the chief officer in charge of US foreign exchange policy. As such, market participants are expecting a wide range of questions on the topic at Tuesday’s confirmation hearing.

The Treasury Secretary nominee also faces tough questions over the ballooning national US debt following a government spending spree amid the ongoing pandemic, a trend that is only expected to continue. With a divided political landscape, President-elect Joe Biden’s economic agenda – which depends on a high need for spending to fuel stimulus efforts – faces Republican opposition. Tomorrow’s hearing will give market participants their first indication of how strong and persistent that opposition may be.

According to The Wall Street Journal, Ms. Yellen is expected to make clear that her view is that the US should remain committed to market-driven pricing in USD exchange rates and take a hands-off approach on commenting on that exchange rate, a view not entirely shared by the outgoing Treasury Secretary Steven Mnuchin. So, silver prices will likely be at the mercy of what Ms. Yellen says.

Silver pivoted higher from a multi-week low earlier this week following a broader decline rooted in the opening days of the year. The recent move higher has repositioned silver into a more bullish outlook from a technical perspective, but there remains a way to go before reclaiming fresh higher ground. Still, momentum is picking up, with the MACD climbing above its signal line on the four-hour time frame.

The Relative Strength Index (RSI) is also moving higher within neutral territory. Moreover, prices are currently attempting to overcome the 20-period (yellow line) Simple Moving Average (SMA) after rising through the 50% pseudo-Fibonacci retracement level from the November to January move. Further upside will bring the 50-period (blue line) SMA into focus before attacking the 38.2% Fib level. To the downside, possible trendline support along with the 50% pseudo-Fib level may offer support. 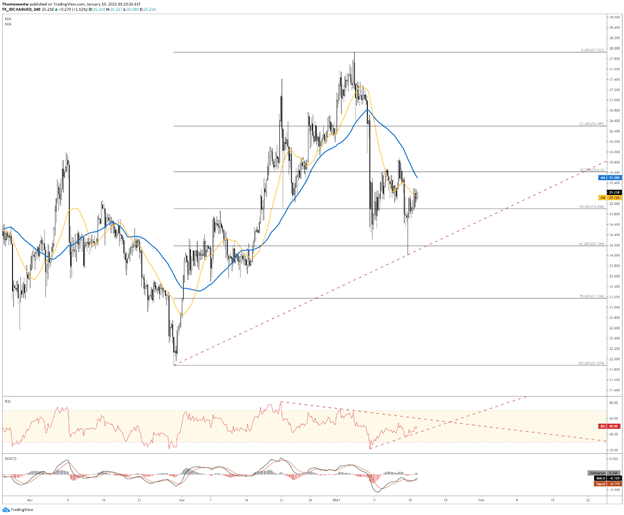