The outcome seemed to reinforce the sense that US monetary policy will remain at an ultra-dovish setting for the foreseeable future, lifting inflation expectations while nominal rates stayed near record lows. The 5-year breakeven rate, a gauge of price growth bets implied in bond markets, hit a 6-month high.

The markets responded as one might surmise they would. Gold rose on store-of-value demand. The metal yields nothing, but that is comparatively better to a negative real rate of return. Similarly, paltry but still-positive benchmark dividend yields helped stocks rise. Sentiment-geared crude oil prices followed.

Looking ahead, US fiscal stimulus negotiations may be in focus as officials scramble to get a deal done before Congress departs for a recess at the end of the week. Democrats have put up a proposal costing $3.5 trillion while Republicans countered with a $1 trillion scheme.

A deal seems likely as policymakers look ahead to November’s election, so its size will probably be most meaningful from a market-moving perspective. Anything shy of $2 trillion may be met with disappointment, boosting haven demand for the US Dollar and broadly hurting commodity prices. 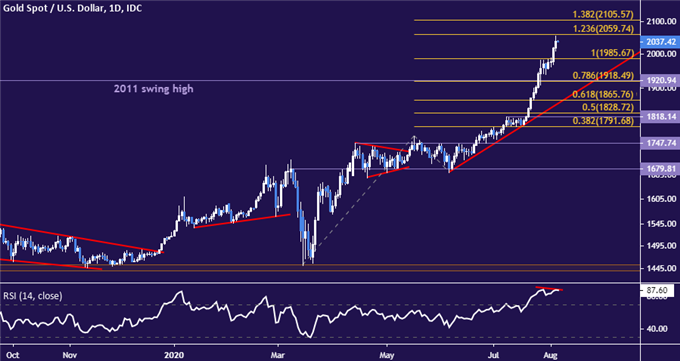 Crude oil prices pointedly recoiled from resistance in the 42.40-43.88 area, producing an imposing Shooting Star candlestick. Coupled with negative RSI divergence, the setup hints at exhaustion that might set the stage for bearish reversal. A daily close below swing low support at 38.74 looks likely to target the 34.38-78 zone next. Alternatively, a breach of resistance may put the $50/bbl figure in the crosshairs. 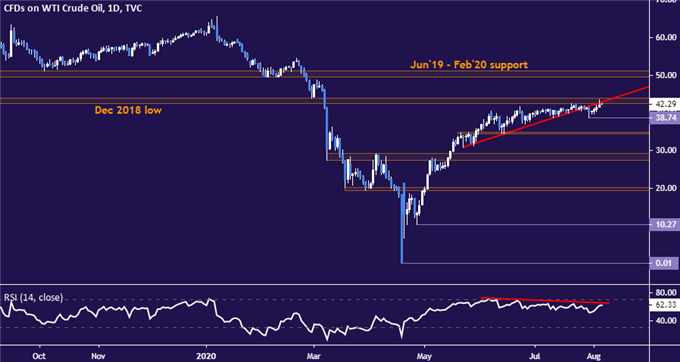