Crude Oil Prices Up with Gold and Stocks as US Dollar Drops, EIA Eyed

A risk-on backdrop helped crude oil prices push higher alongside stocks yesterday. Meanwhile, the safe-haven US Dollar plunged, driving gold prices to a new record high amid surging demand for anti-fiat alternatives. The move appears to reflect parallel bets on a recovery in growth and inflation coupled with expectations of a sticky dovish stance on monetary policy.

Tellingly, the lion’s share of the move came as the spread between the 2-year US Treasury yield and the equivalent-maturity breakeven rate – a measure of inflation expectations derived from bonds – accelerated lower. As it happens, price growth bets have recovered alongside shares after the Fed launched open-ended QE in late March while nominal rates have mostly idled since falling at the start of the Covid-19 outbreak.

This has translated into an increasingly negative short-term interest rates. The impact is two-fold. First, the cost of capital is very low while baseline returns on safer assets is essentially non-existent, pushing investors to riskier assets. Stocks and cyclical commodities like crude oil fit the bill. Second, the relative appeal of non-interest-bearing gold is bolstered by comparison to negative-yielding cash.

Looking ahead, bellwether S&P 500 futures are pointing convincingly higher ahead of the opening bell on Wall Street, hinting that the risk-on mood is gearing up for follow-through in the hours ahead. That probably bodes well for crude oil and gold prices as sentiment-sensitive assets across the spectrum benefit, while the metal takes advantage of USD weakness as its anti-risk profile becomes a near-term handicap.

A relatively quiet economic calendar is headlined by a revised set of July US PMI figures as well as official EIA inventory flow statistics. The latter are expected to show that stockpiles shed 2.31 million barrels last week. An analogous estimate from API published yesterday put the number at 8.59 million barrels, opening the door for a surprise that might buoy crude oil prices.

Crude oil prices are testing resistance in the 42.40-43.88 area once again. A daily close above this barrier looks likely to set the stage for a challenge of the $50/bbl figure. Negative RSI divergence speaks to ebbing upside momentum and may precede a reversal lower however. A turn back below the swing low at 38.74 may seems likely to put the 34.38-78 area into focus next. 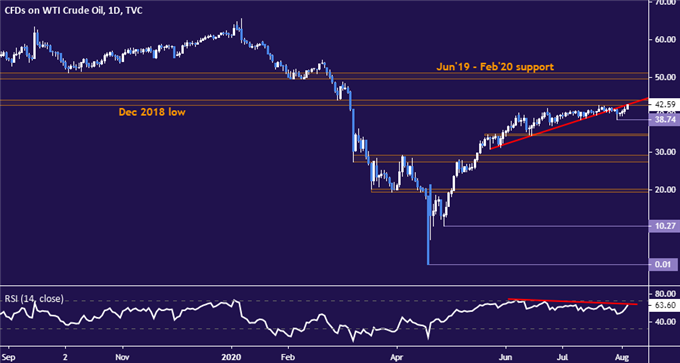 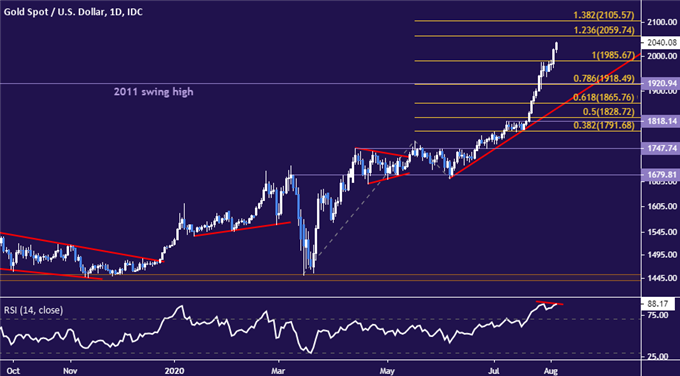