Gold Prices Rally, Crude Oil May Be in Limbo Ahead of OPEC+ Meeting

Oil could be in limbo as traders await a meeting between the Organization of the Petroleum Exporting Countries (OPEC) and key allies. Reports crossed the wires on Monday that OPEC+ could bring forward the meeting to June 4. A key issue that is going to be discussed is whether or not record output cuts could be extended between one to three months.

As a reminder, earlier this year a price war was triggered between key producers Saudi Arabia and Russia. The latter’s initial refusal to participate was a detriment to the commodity. Towards the end of last month, Russia hinted that it wanted to push for easing production restrictions. A similar row between Moscow and Riyadh could risk reigniting selling pressuring in crude oil prices.

S&P 500 futures slipped into the red during Tuesday’s Asia Pacific trading session, perhaps pointing towards a ‘risk-off’ tone to come in the remaining 24 hours. If this dynamic rekindles US Dollar strength, that may cap upside progress in gold prices in the near term. Down the road, the medium-term fundamental outlook for the yellow metal seems favorable as central banks around the world refrain from raising interest rates.

Gold prices have re-entered the key range of resistance between 1730 – 1747. This is as rising support from the middle of April seems to be cautiously guiding the yellow metal higher. Keep a close eye on RSI in the event negative divergence emerges. That is a signal of fading upside momentum which could precede a turn lower. A close under 1703 exposes the key range of support between 1658 – 1678. 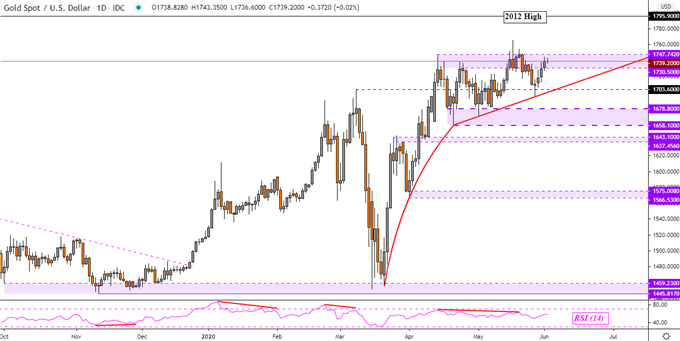 Crude oil prices have thus far made marginal upside progress after pushing above descending resistance from the beginning of this year – pink line below. This is leaving the commodity facing former lows from August 2016 which could come into play as new resistance. Turning lower likely entails taking out key support which is a range between 29.11 – 31.14 that has its beginnings from peaks reached in April.