US crude oil prices plummeted in Monday’s Asia Pacific morning as the market continued to worry about a coronavirus-related collapse in demand even as supplies remain ample despite production cuts.

The price of West Texas Intermediate for May delivery fell to $15.43/barrel, with the futures contract due to expire this week for that month. Prices are now at lows which haven’t been seen for more than twenty years.

With demand stagnant and storage tanks close to full the market has entered what is known as contango, the case in which spot and near-month product costs much less than more distant futures. The market then scrambles to lease storage space to hold cheaply acquired crude in the hope that it can be sold at profit later.

Gold prices slid into the Asian session, weighed down by the stronger US dollar and, perhaps, hopes that come national economies may for good or ill emerge from their lockdowns.

However, risk appetite remains extremely fragile with benchmark equity indexes like Japan’s Nikkei 225 and Australia’s ASX200 both sharply lower as investors look with trepidation towards this week’s bulky US earnings season calendar.

Chinese stocks made some gains as prime loan rates in that country fell once again in another effort to stimulate activity. However, the global trend towards lower borrowing costs -and therefore lower bond yields- is supportive for the gold market whose product famously has no yield. 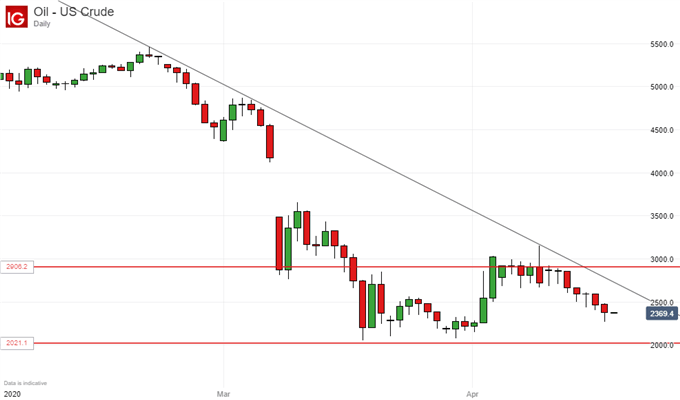 Prices continue to respect a downtrend in place since February 20 and itself merely a continuation of the retreat from January’s peaks. That downtrend is safe unless prices can retake $27.50’barrl but there seems little sign of that prospect, although the market has traded closer to the overall downtrend line this month than it did in March. 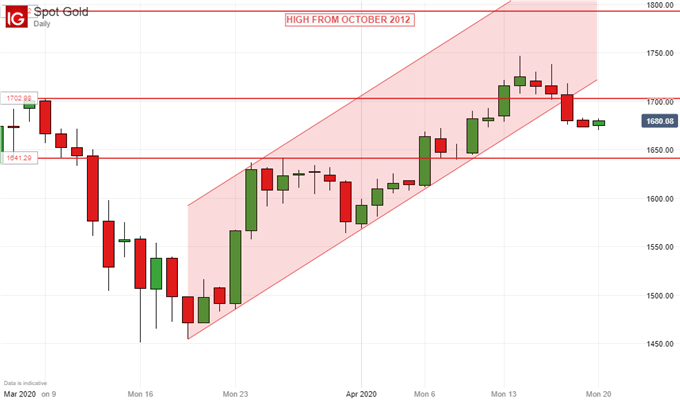 Gold prices have slipped below the lower boundary of their previously dominant uptrend channel. There’s clearly no appetite to take major profit even at current, quite-elevated levels but equally there’s no impetus to push above this year’s highs either.

The market seems to be in a broad trading band between the $1700 point which marks that lower channel boundary and now acts as resistance, and the $1650 level which kept the bears in check on April 7, 8 and 9. At present another upside test of this band looks more likely than a fall to its lower reaches.