Gold prices moved up to one-week highs even as Asian stock markets made gains on Monday. Risk appetite remains elevated as Wall Street closes in in on its largest and longest ever bull run but the interest rate environment still looks quite conducive for the non-yielding metal.

The US Federal Reserve will give its first 2020 monetary policy decision next week, on January 29. The market strongly suspects that rates are going nowhere and that they’ll remain on hold for the year. This prognosis is implicitly supportive of gold, even as riskier assets also like it. Higher rates mean higher returns on ‘risk free’ assets like US government debt which can tempt investors away from the metal.

Bank of America analysts noted on Friday that the US S&P 500 index is within 5% of posting its largest ever rise without a corrective bear-market fall of 20%. The 1990s saw the longest previous run but the index will surpass it if it can get to 3498. Much of the current rise has been underwritten by Fed assurances that the bar to rate-raising from here is very high.

The Chinese New Year break is coming up at the end of the week and, with long holidays widespread in the region investors may not want to be short of gold going into it.

Crude oil prices edged lower but were essentially rangebound through the Asian session as a new week got under way. Major producer Libya remains in focus after the shutdown of two major facilities there Friday sent prices up to one-week peaks.

This was only the latest development in a long internal conflict. Two rival groups have asserted the right to govern the country for more than five years. The National Oil Council reportedly said on Sunday that two big southwestern fields had begun shutting down following the closure of a pipeline by forces loyal to the national army.

Headlines from the region may well continue to dominate the market on Monday given the absence of major scheduled economic news.

Gold’s daily chart clearly shows the metal’s resilience to revived risk appetite, with January’s rise to highs not seen since May 2013 still well within the bulls’ range.

Prices are attempting to break the top of their current range again, when last week it seemed that they were topping out well short of it. A conclusive break will probably see those bulls try for Jan 5’s closing high of $1569.32/ounce as an initial target. However given looming Asian holidays and the stretched nature of this market sustainable gains may be hard to come by above the range top, at least for another week or so. Market watchers should probably be prepared for a retreat back into the range, even if prices manage to get above it.

Prices have bounced quite convincingly at the top of a band of support formed quite neatly by the third and fourth Fibonacci retracement levels of the rise seen between October 2019 and January this year. They come at $58.19/barrel (50% retracement) and $56.48 (61.8%). 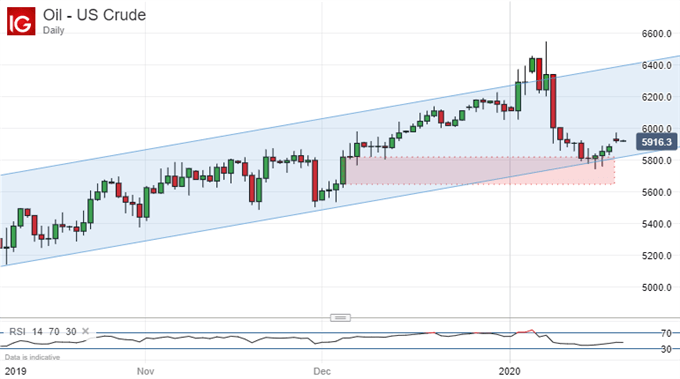 Prices clearly bounced at the top of that band on January 15. Bulls can hope that the steep falls seen between January 6 and 13 will be clawed back as long as that support holds, but the process seems likely to be a gradual one.