Gold prices are heading for fourth consecutive day of losses, this time bedeviled by a recovering US Dollar. The yellow metal just can’t seem to catch a break this week. The greenback notably diverged from risk on/off dynamics earlier in the week, but gold suffered all the same as borrowing costs rose. Now, with the US currency on the upswing and yields treading water, the standby anti-fiat asset looks no more attractive to investors.

From here, fourth-quarter US GDP figures are firmly in the spotlight. A slowdown is expected, with the on-year growth rate ticking down to 2.2 percent from the significantly rosier 3.5 percent recorded in the three months to September. A flattering trend in US data outcomes relative to forecasts over recent months opens the door for an upside surprise, which might compound pressure on gold prices.

Sustained follow-through might be a tall order however. The way forward for precious metals will almost certainly depend upon the policy pursued by the Federal Reserve. Central bank officials have stressed that this will be substantially influenced by a fiscal stance that – if nothing else – aims to be highly activist. Without more clarity from Team Trump, traders may avoid commitment to a firm directional bias.

Yesterday’s pop in crude oil prices may be a case in point, illustrating how mixed messages from the White House are stoking kneejerk volatility. The administration floated the idea of using a 20 percent import tariff on Mexican goods to pay for a wall along the US’ southern border. The markets apparently figured that refiners importing Mexican crude would pass on higher costs to consumers, sending oil prices higher.

Where will gold and crude oil prices go for the rest of the first quarter? See our forecasts here !

GOLD TECHNICAL ANALYSIS – Gold prices continue to sink having reversed downward as expected. Near-term support is nowat 1183.28, the 14.6% Fibonacci expansion, with a daily close below that exposing the 23.6% level at 1183.28. Alternatively, a move back above the 1200/oz figure opens the door for a retest of the 38.2% Fib retracement at 1219.20. 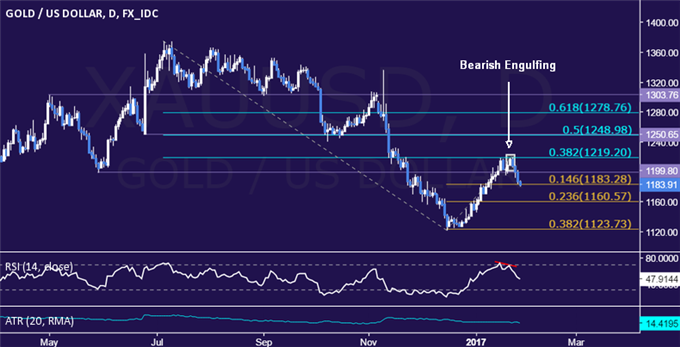 CRUDE OIL TECHNICAL ANALYSIS – Crude oil prices attempted a more convincing advance than had been seen in recent days but prices a still failed to breach the boundaries of their recent range.Resistance remains at 53.75, the 23.6% Fibonacci expansion, with break above that exposing the 55.21-65 area (January 3 high, 38.2% level). Alternatively, a move below 52.44 paves the way for a challenge of the 50.25-69 zone (38.2% Fib retracement, January 10 low). A close underneath this threshold would complete a crude Head and Shoulders topping pattern and hint at a longer-term downturn ahead. 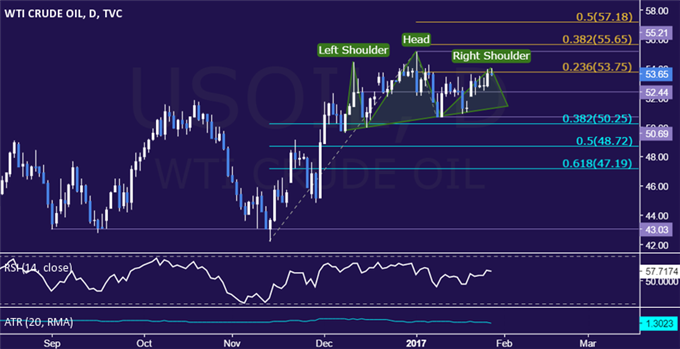