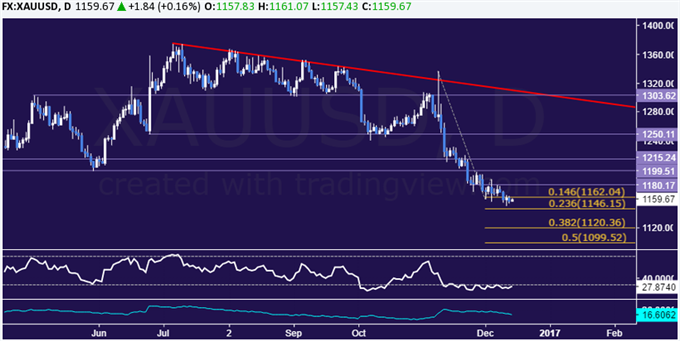 The central bank is widely expected to issue a rate hike. Indeed, the priced-in probability of a 25 basis point increase implied in Fed Funds futures has stood at 100 percent for some time, suggesting the change has been accounted for in asset prices and will not generate a significant reaction from investors by itself. This shifts the spotlight to updated forecasts economic and policy forecasts as well as comments from Chair Yellen.

Fed officials are probably keen to avoid last year’s bungled communication effort accompanying so-called “liftoff” – the first post-QE rate hike – when a disconnect between FOMC projections and those of the markets set off risk aversion and derailed policy for much of the year. This points to a concerted effort to maintain the status quo via the forecasts as well as the Chair’s remarks.

On balance, this seems to add up to an announcement that does next to nothing to propel speculation. In this scenario, the passage of the year’s last bit of truly top-tier event risk may be treated as giving investors the green light to square their books before the holidays. The requisite profit-taking that this implies may drive the US Dollar lower and in so doing boost commodities, sending both gold and crude oil upward.

GOLD TECHNICAL ANALYSIS – Gold prices are digesting losses after sliding to a nine-month low late last week. Early signs of positive RSI divergence hint a bounce may be brewing ahead. A daily close above the 14% Fibonacci expansion at 1162.04 exposes support-turned-resistance at 1180.17. Alternatively, a push below the 23.6% level at 1146.15 exposes the 38.2% Fib at 1120.36.