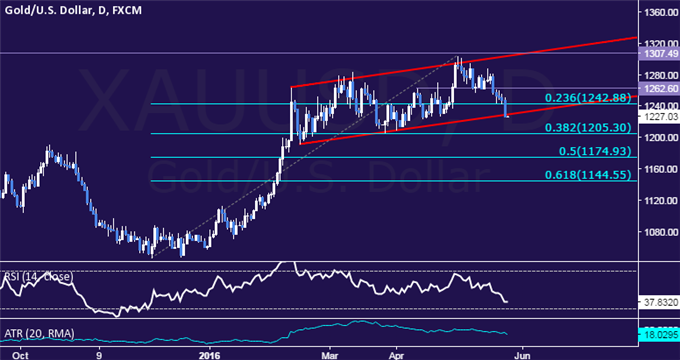 Crude oil prices pushed higher alongside a recovery in stock prices, with the advancing WTI contract tracking S&P 500 futures over the prior 24 hours. The recovery in sentiment began with yesterday’s European trading open, preceding upbeat US New Home Sales data published later in the day and subsequently cited around the news-wires as a would-be catalyst. In fact, a single readily-identifiable trigger appears absent.

Looking ahead, Fed-speak returns to the spotlight as comments from Neel Kashkari and Robert Kaplan – Presidents of the central bank’s Minneapolis and Dallas branches – cross the wires. A hawkish tone matching recent commentary from other Fed officials may continue to boost rate hike chances, punishing precious metals. Sentiment has proven impressively resilient despite swelling stimulus withdrawal bets, warning against assuming an automatic risk-off response in this scenario.

For its part, oil is eyeing the weekly set of EIA inventory figures. A 1.66 million barrel crude stockpile drop is expected. A private-sector estimate from the American Petroleum Institute (API) hinted at a larger drawdown of 5.14 million barrels yesterday, making for the largest outflow since December 2015. Prices may rise if this proves to foreshadow a larger-than-expected decline on official readings.

FXCM traders are net-long gold by a margin of nearly 2 to 1. What does this hintaboutthe trend?

GOLD TECHNICAL ANALYSIS – Gold prices may be resuming their long-term down move after a narrow break of rising channel floor support set from mid-February. Near-term support is now at 1205.30, the 38.2% Fibonacci retracement, with a break below that on a daily closing basis exposing the 50% level at 1174.93. Alternatively, a reversal above channel support-turned-resistance at 1230.05 targets the 23.6% retracement at 1242.88.

CRUDE OIL TECHNICAL ANALYSIS – Crude oil prices overturned previously noted bearish reversal cues, pushing upward to issue the highest daily close in over seven months. From here, a push above the 61.8% Fibonacci expansion at 50.13 targets the 76.4% level at 51.82. Alternatively, a reversal back below resistance-turned-support at 48.77, the 50% Fib, sees the next downside barrier at 47.41 marked by the 38.2% expansion. 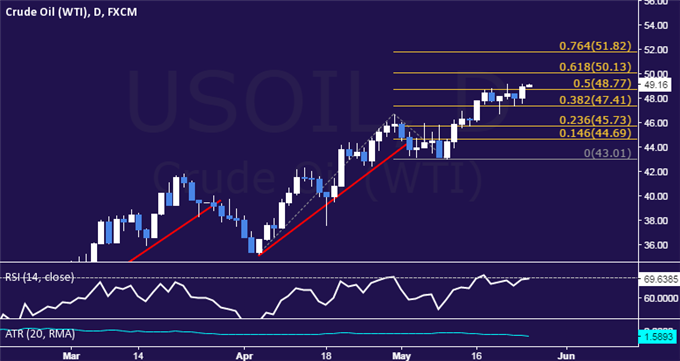