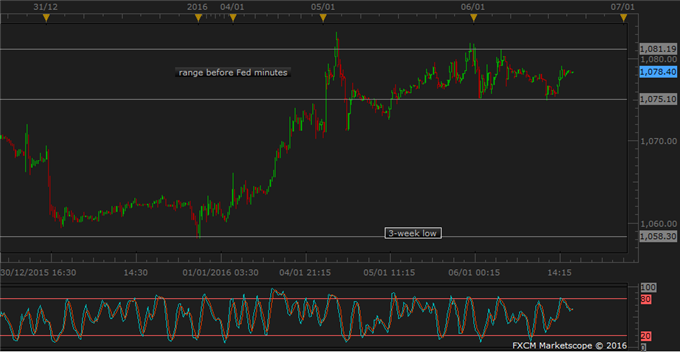 A surprisingly high USD/CNY fix today led to USD bid and risk-selling in Asia. This was not helped by news of a probable North Korea nuclear test and lower-than-expected China’s services and composite PMIs. Commodities were sold together with AUD, NZD, while gold and safe-haven JPY garnered buying interests.

Gold price lingers near the high of Tuesday’s rally and may be contained within 1075.1-1082.1 range, baring new geo-political developments in Asia. However these gains are vulnerable to market’s positioning before and after the release of the Fed’s December meeting minutes – slated for early January 7 (Asia time). Moreover, the effects of Chinese government’s interventions to rescue stock market and currency likely add to mixed price action.

Oil price remains near a 2-week low around $35, before Department of Energy releases stock data for the week ended January 1. Earlier report of a 5.6 million barrels draw from the industry-funded American Petroleum Institute helped to prop up crude above $36. However increased stockpiles of refined-products and a 1.4 million crude build at Cushing hub pose downside risk ahead of official data.

Copper price stabilized around 2.0900 after touching 2.0800 on the downside, following risk-offloading in Asia. Mixed developments keep copper in a range as moderate recovery in the Shanghai Stock Exchange was offset by disappointing Caixin China Services and Composite PMIs. Today stock gains may restore confidence in the Chinese government’s ability to avert market rout, thus relieve pressure in metals.

GOLD TECHNICAL ANALYSIS – Gold price stays in range between 1075 and 1081 after a rally on Tuesday. As upward momentum in RSI starts to wane, downside risk due to the Fed’s December minutes could lead gold lower toward a 3-week low at 1058.3. Bull traders should keep tight stops coming into the event.

COPPER TECHNICAL ANALYSIS – Copper price recorded low volatility throughout the festive season and was well contained within the 2.0020-2.2025 range. There is no clear directional signal nor fundamental driver for copper, leaving it susceptible to macro sentiment. Range trades prevail. 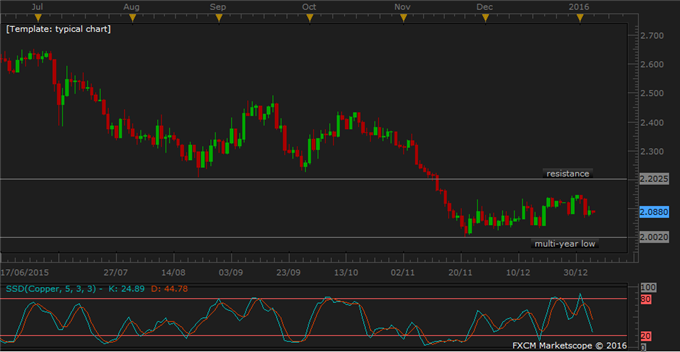 CRUDE OIL TECHNICAL ANALYSIS – WTI oil price is on a third day of declines, heading to a multi-year low at 34.25. The possibility of a break of support remains unclear, with downward momentum signal near exhaustion. The oil bears should keep stops close to support level when placing short-term trades. 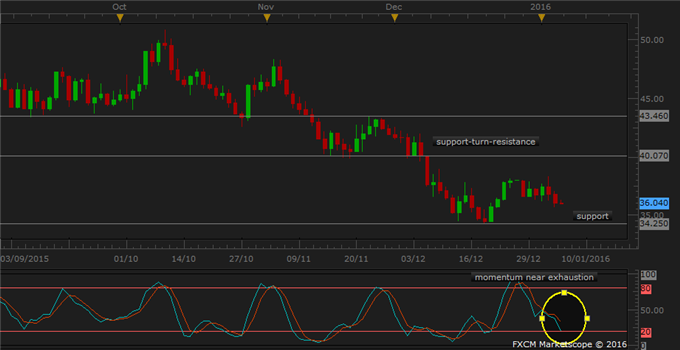