Gold is on a 7th day of straight declines as speculation for a rate hike climbs ahead of U.S. Non-farm Payrolls release. Earlier in Asian session, St. Louis Fed President James Bullard said in an interview with Reuters that slowing monthly job growth (NFP) is natural at this stage of economic recovery and that should not deter the Fed from rate hike consideration.

This supported Fed Chair Janet Yellen’s testimony to US House yesterday that a December hike remains a live possibility. Investors were quick to dump more gold at signs that the bar on an acceptable NFP number (for a hike) has lowered. Next support at 1098.9 may not hold out for long.

Genscape outlined that Cushing hub took in nearly 713,000 barrels in four day leading to November 3, which would have offset the earlier draw.

Oil price is still supported by higher refinery runs however a stronger US dollar means that lower crude production is required to maintain price above 40-45 levels. Bearish consensus is dominant.

Copper broke 2.2730 support level and the downtrend is here to stay with prolonged consumption concerns after poor China data lately. The country consumes 45 percent of the world’s copper, therefore only positive growth and a factory pick-up would alleviate the situation. Next support to watch is 2.2025, a double bottom during August-September.

Nevertheless, prices could improve in the short term due to supply constraint. A new wave of output cuts and downward revision to production indicate tightening market through to next year. This occurs in the largest copper producing countries like China, Chile, US, Zambia, Peru, Mongolia and Australia.

GOLD TECHNICAL ANALYSIS – Gold halted its fall ahead of 76.4% Fibo at 1102.5. However as observed in past sessions, a pause during Asia’s trade may transform to a slide in European and US sessions. Gold is on the 7th session of straight declines with clear downtrend signal by moving averages. A release of Non-farm Payrolls today may help to contain the downside if data disappoints. Otherwise there is no stopping it toward July and this year’s low. 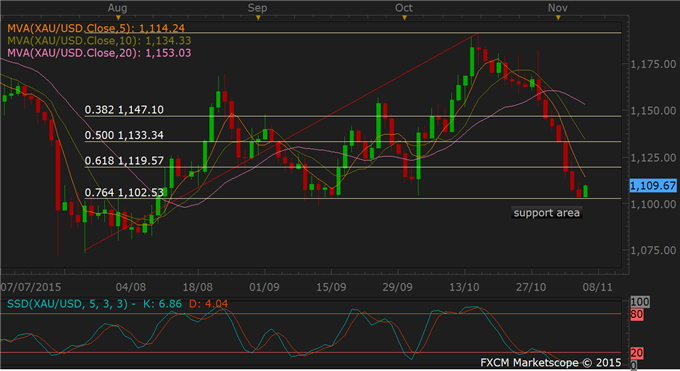 COPPER TECHNICAL ANALYSIS – Copper is firmly on a downtrend, heading to this year’s record low and support level at 2.2025. Downtrend signals indicate lower moves are in store and this week is all about the bearish trade. Copper bears could trail stops to 20-day moving average and resistance, currently at 2.352. 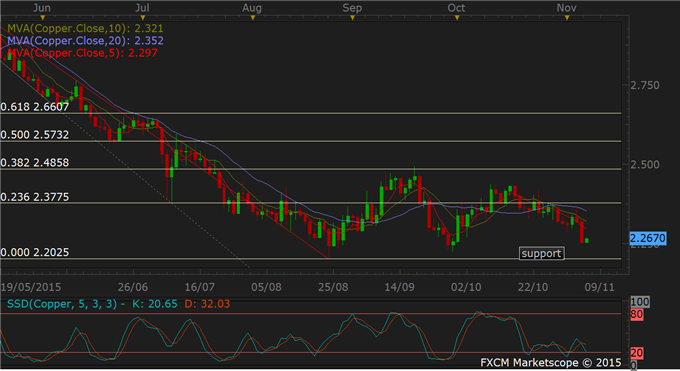 CRUDE OIL TECHNICAL ANALYSIS – WTI oil stalled its 2-day rally with a dip near $45 yesterday. This level may not hold as support for long amid downward momentum signals. Firm support comes at 43.35 (23.6% Fibo). Oil will likely hold a bearish bias for the rest of this week although there is slim chance for a break below the Fibo. 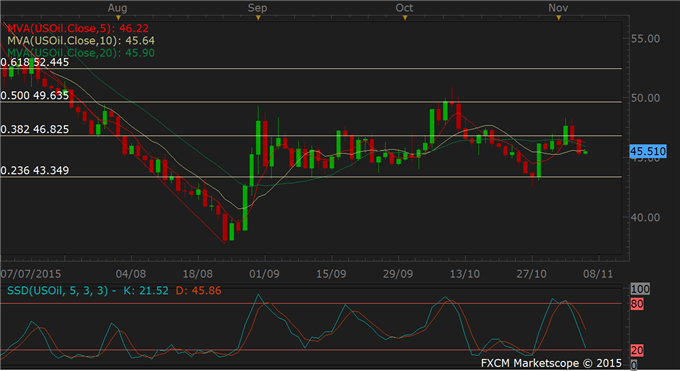