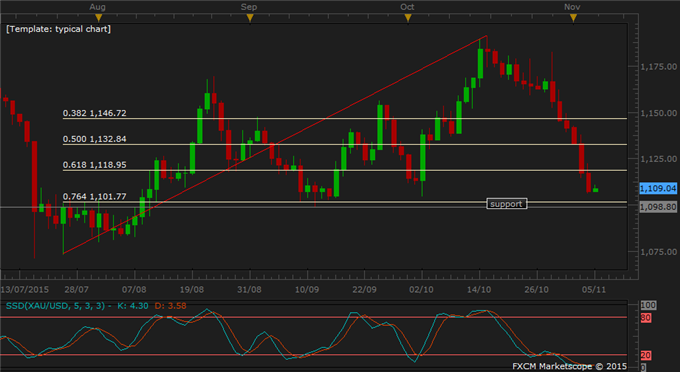 Gold took another hit overnight from Chair Janet Yellen’s testimony before the House of Representatives that December rate hike is a live possibility, provided economic data hold up. On top of that, positive employment and slightly narrower trade deficit led to ensuing rally of US dollar while equities, fixed income, and gold sold off.

Today’s thick event calendar could potentially push gold lower with any positive economic or rate hike comments. The precious metal is used as a hedge during time of market turmoil and lower rate, hence interests wane when growth improves or interest rate increases.

Oil reversed all gains from the recent rally and returned below 46.79 as a 0.8 percent gain in US dollar led to selling of commodities. Attention also turned to physical surplus after crude inventory saw a larger build than expected at 2.874 million barrels while Cushing draw was smaller than last week, according to official weekly data by U.S. Energy Information Administration.

Copperretreated toward a support level at 2.3165 together with oil while US dollar advanced. It reached a weekly high of 2.3620 in the US earlier as Glencore announced production cut and China equities rallied for a second day.

The world’s third largest copper miner said it will cut another 55,000 metric tons of output through 2017. Stock rally in China and Japan during the day helps to contain copper’s downside. The Shanghai Composite has gained 6.8 percent since yesterday’s open.

GOLD TECHNICAL ANALYSIS – Gold is falling toward a double bottom at 1098.8 which held up prices in September and early October. This support level coincides with 76.4% Fibo of the July-October rally, making it harder to break. There is still no sign for a rebound so the bears can hold on to their shorts while being mindful of volatility around support.

COPPER TECHNICAL ANALYSIS – Copper continued choppy price action after it extended up to 20-day moving average at 2.363 yesterday. There is no concrete signal in either direction hence volatility is ripe between 2.2730 support and 20-day MA. Range traders could trail their stops along the MA. 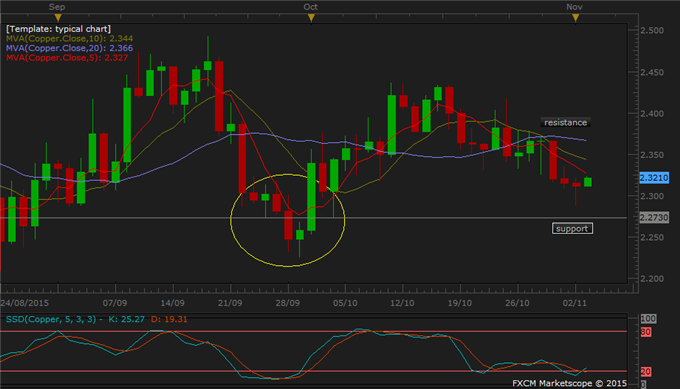 CRUDE OIL TECHNICAL ANALYSIS – Brent oil pared all the gains of last two days and retreated close to 48.48 support level once more. A break lower would open up the area towards 47.50, whereas repeated failures will likely lead to a rebound. Oil prices remain under pressure although there is not yet a downtrend signal. 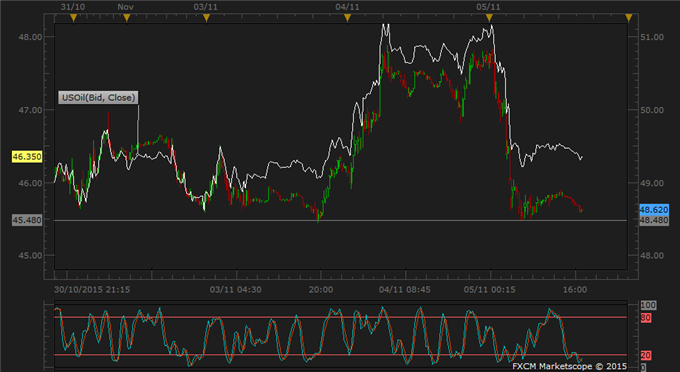