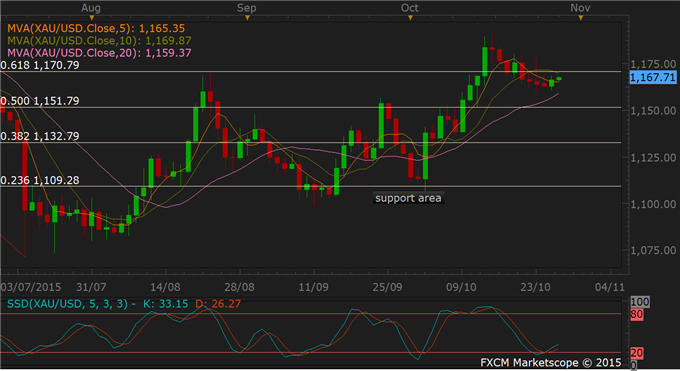 Copper carried on yesterday’s slide as shares of base metal miners dropped at China market open due to third-quarter earnings. Jiangxi Copper, Capstone Mining, Southern Copper Corp are among the names. The Shanghai Composite index lowered after noon time and copper looks weak on the downside, although further declines will likely be contained by a support level and yesterday’s low at 2.3425.

Gold bounced up toward 1169.1 resistance level after a lower-than-expected third-quarter Consumer price index led the Aussie dollar to drop 1.7 percent. In a thin market heading to Federal Reserve’s meeting early tomorrow (Asia time), soft inflation data offers gold bulls an excuse to load more long positions in anticipation of the Fed’s inaction. Market consensus is unanimous on no-hike at this October FOMC meeting. Gold might break above the upper bound of range while support levels come at 1163.4 and 1159.8.

After an overnight crash to 42.58, oil stayed weak with the rest of the commodity complex amid mild selling of commodity currencies and shares in Asia Pacific. Preliminary inventory data from the American Petroleum Institute showed a build of 4.1 million barrels last week. Official data from the EIA today is expected to echo this with a persistent rise in oil stocks since August, even as producers shut more rigs. Lower price extensions may follow, with support level at yesterday’s low 42.58.

GOLD TECHNICAL ANALYSIS – Gold is on a second day of gain, heading toward a resistance level at 1169.1 or 61.8% Fibo at 1170.8. Upward momentum signals indicate further rises are to come, which confer good chance for a breach of resistance. The bulls may utilise a support level at 20-day moving average of 1159.3 to trail their stops.

COPPER TECHNICAL ANALYSIS – Copper slid below a support-turn-resistance at 2.3575 and likely holds there given short-term downside bias. The metal stays range-bound on a third day after its plunge following China’s rate cuts last Friday. Range traders may look to play the range in the absence of directional signals. 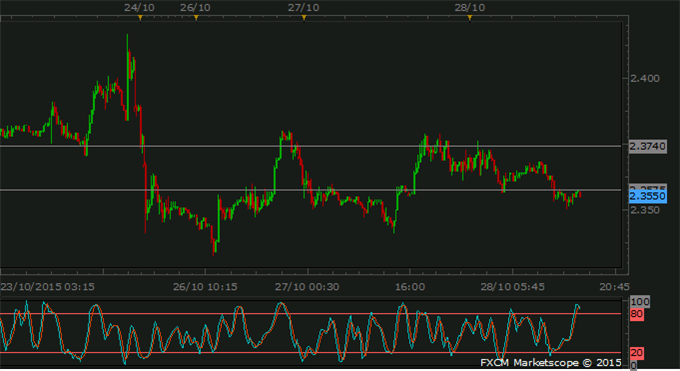 CRUDE OIL TECHNICAL ANALYSIS – WTI oil remains under pressure although it has rebounded from a new low at 42.58 during Asia trade. It is looking to retest an intraday resistance at 43.36 however imminent downside risk from EIA’s inventory report may contain any higher moves. There is no stopping to the oil decline at this moment. The bears may keep watch of 5-day moving average and firm resistance level at 44. 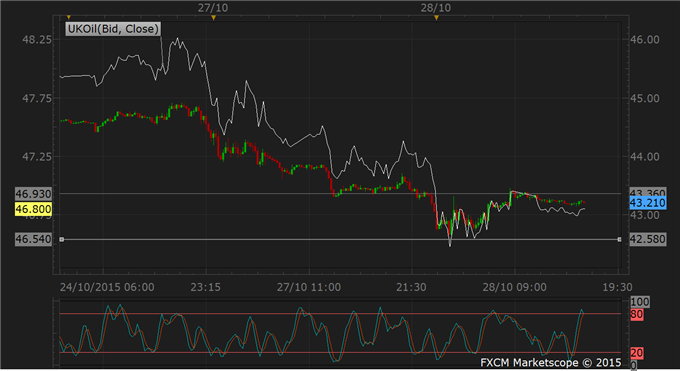