Gold extended higher in Asia trade as the market continued to digest Draghi’s comments at press conference following European Central Bank’s meeting overnight. Hints of further stimulus to come at the bank’s December 3 meeting and lack of confidence on inflation – a main target of ECB – spelled dovish to onlookers.

With this, the ECB has potentially started an easing cycle among central banks, including lowered expectations for rate hike by the Fed and Bank of England. Pressure is mounting on the Bank of Japan, Swiss National Bank, and the Reserve Bank of Australia to ease in tandem.

The episode sent EUR plunging with the second highest trading volume in four years, while US dollar was heavily bought. Effect to commodities has been rather mixed with a higher USD offsetting risk-buying interests.

As usual, prospects of central bank’s easing (or a delay of tightening) revives interests in gold as competition with yield-bearing assets relaxes. Gold prices halted the week-long decline to head up toward 61.8% Fibonacci at 1173.2, although gains are offset somewhat by a rally in the US dollar. Looking ahead, market interests should support the downside, if not boosting upside gains.

Nevertheless oil failed to break above a resistance level at 45.72 during the Asian session. Repeated failures to breach may lead to oil being range-bound for the rest of this week.

Copperwas the only major commodity that fell in the aftermath of ECB. It sets to end at the deepest loss in four weeks, given ample supply and persistent losses in the metal complex. Copper traded sideways during Asia session with a downside bias and an intraday support at 2.3710.

Support to copper emerged as US existing home sales bounced back sharply to 4.7 percent in September from negative 4.8 percent in August. This has yet filtered into global copper prices, yet copper traded on the Shanghai futures exchange already rose nearly 1 percent today.

GOLD TECHNICAL ANALYSIS – Gold remained stuck in the range 1163.4 – 1169 that has held for two days. An upside bias is emerging and prices lingered near resistance level during Asia trade. There is still no directional signal and range trading likely prevails coming into next week. 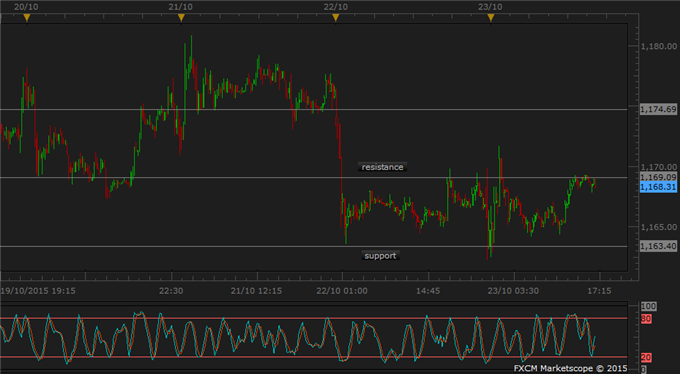 COPPER TECHNICAL ANALYSIS – Copper tested the 2.3740 intraday support level three times so far today. In the event of a break, next support will be at 2.3575. The daily chart shows copper on a third day of higher moves so the bulls are still at an advantage. The clearer signs of an upturn will be a clean break above resistance and 23.6% Fibo at 2.3775. 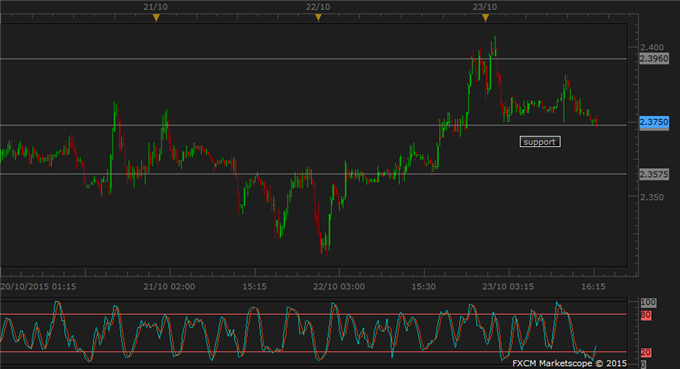 CRUDE OIL TECHNICAL ANALYSIS – WTI oil is on a second day of gain although it failed to breach above a resistance at 45.72. On the downside, it formed a double dip at 44.90 on October 21 and 22, which is acting as a firm support level. If no new macro indicators emerge, prices may remain stuck within this narrow range. The bears should be cautious now that prices break away from the 3-day downturn. 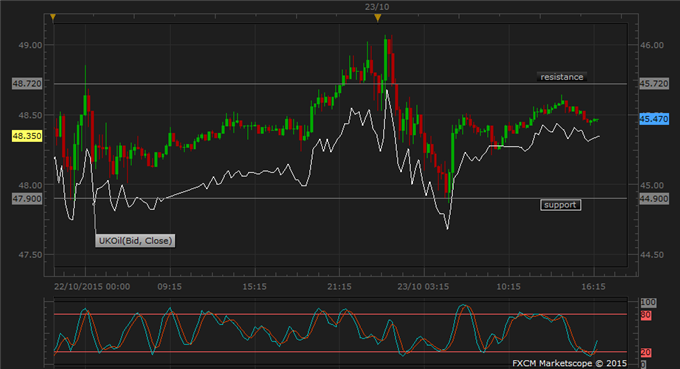