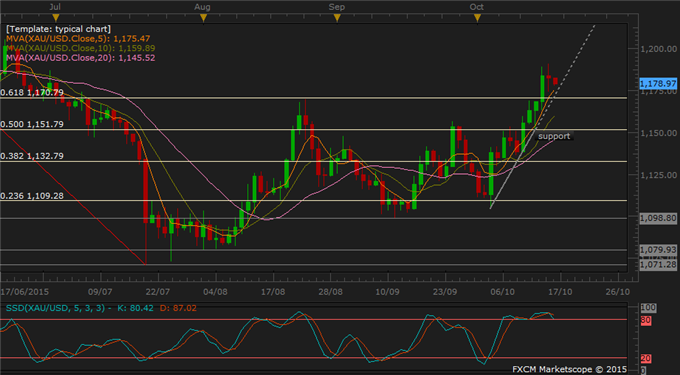 Risk-on mood dominated Asian market following gains in S&P 500 and US dollar’s swings overnight. Commodities garnered support as the indices ASX and Nikkei rose nearly 1 percent before Shanghai Composite opened up, although profit-taking before the weekend may send some commodities lower.

USD weakness is still a prevalent undertone in the FX market, which sustains the rise in commodities. A USD jump after good US’s Inflation and Initial jobless claims was quickly offset within the US session.

Copper continued choppy trading due to volatile swings in US dollar. It tested one-month high at 2.4375 again after dipping to 2.4020 following strong US data. Topside will remain the focus of price action while Asian equities consistently rise and USD stays weak.

This year London Metal Exchange’s LME Week, an annual summit of market participants from around the world, finishes today. These players will bring the information acquired back to their work next week, as such there may be more chance for copper to break out of range by then.

WTI oil hit a bottom at 45.23 and set for the longest losing streak since July, as stockpiles rose the most since April. The Energy Information Administration reported an increase of 7.6 million barrels last week, after a 9.4 million barrels weekly gain recorded by API a day prior. Volatility on the last trading day of November options contract had little impact.

News that Russia is ready to discuss oil price-bands and output cuts with OPEC at the October 21 meeting pushed prices up to test a two-day resistance at 47.04. If Asian bourses continue to gain and USD stays weak, a breach may occur and oil will head up to a recurring resistance (38.2% Fibonacci) at 47.64.

Gold lowered toward a support area at 1173.2 – 1174.8, after it reached a new three-month high at 1191.67 amid growing doubts on a 2015 rate hike. Mixed US data and statements by members of Fed’s Financial Operation Market Committee added to the confusion. Lael Brainard and Daniel Tarullo argued that the pace of inflation may not catch up with full employment, as such a 2015 rise may be too soon.

GOLD TECHNICAL ANALYSIS – Gold carried on the rally with downside firmly supported by a cluster of support trend line, 68.1% Fibo and 5-day moving average all around 1170-1175. Momentum signals finally flattened out, a sign that the upward acceleration may calm down and even transform to a correction near 1170 support.

COPPER TECHNICAL ANALYSIS – Copper has been confined by various technical levels in recent months as prices moved to macro factors rather than physical supply-demand. It failed to test a resistance at 2.4375 overnight before reversed to test a support at 2.4110. Other support levels below that are 2.4020 and 2.3770. Topside is still in focus with 2.4375 resistance a main hurdle to higher moves. 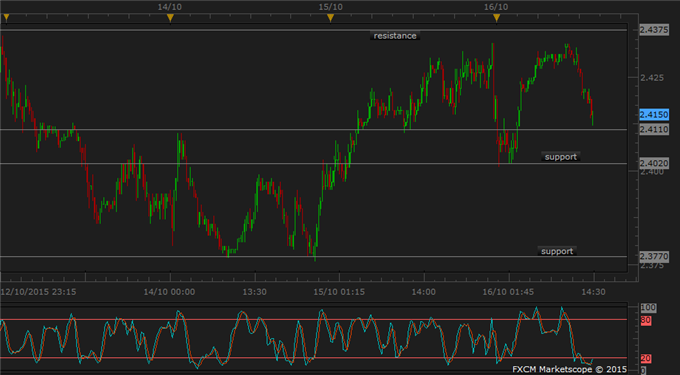 CRUDE OIL TECHNICAL ANALYSIS – WTI oil shifted below the 38.2% Fibo at 47.21 on a third day and is struggling to retrace higher levels. With subdued momentum, oil will likely go through choppy trading under this resistance until the end of this week. The oil bears should be safe unless a break of resistance triggers a rebound. 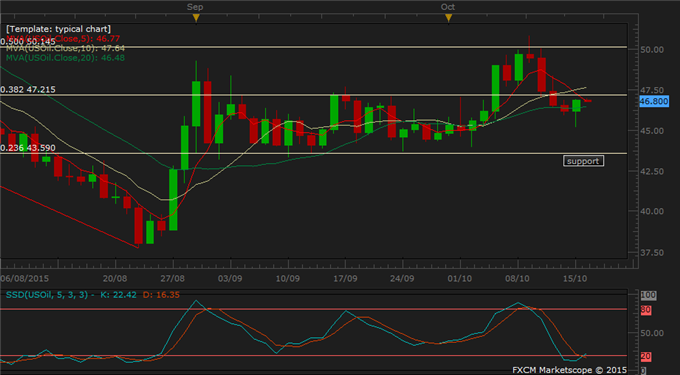