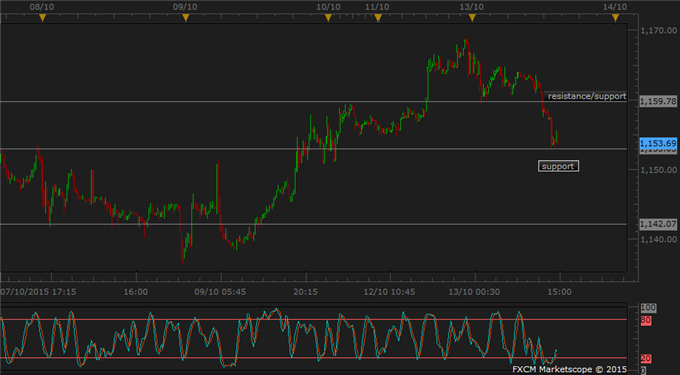 Chinese trade data in the Asian morning added excitement to a thin market after a US holiday. Trade balance well exceeded forecast and prior number which enhanced risk assets, while Imports fell on 11th month and deepened concerns on commodities demand.

Trade surplus as a sign of economic recovery comes just in time before China's Communist Party Central Committees meet for the next 5-year plan on October 26-29. Decisions and guidance here will set the macro tone for future eco-social policies and how China stimulus program will play out.

Oilhas been stuck in the 47s region in Asia since itbounced lightly from a 47.04 low in the US session. Overnight, oil suffered over 6 percent loss after OPEC’s monthly oil market report showed a daily output of 31.57 million barrels, the highest since 2012. This drown out the voice of group Secretary General El-Badri at a conference in Kuwait City that oil market may be balanced in 2016 as demand grows and non-OPEC (i.e. US) supply shrinks.

Gold took a nosedive to 1153.05 after high Chinese trade surplus boosted risk assets and sapped demand for safe haven. This went past a previous resistance-turn-support at 1153.75 and only stopped short of the 1151.41 support. A rise in trade surplus and exports in September both indicated the economy is becoming healthier. Trade balance at $60.34 billion exceeded forecast and Exports was down 3.7 percent from last year, better than an expected drop of 6 percent and 5.5 percent drop in August.

Gold already lowered earlier in the day after another cluster of Fedspeaks, with Lockhart effectively put an October rate hike back on the table. Brainard emphasized that downside risk to the economy need to fall before a lift-off. Evans, as usual, promoted a 2016-hike.

Copper extended today’s decline after Chinese imports fell 20.4 percent on a 11th month. The metal dipped below an intraday support at 2.3960 and entered an area absent of support levels, with the first firm support at 2.3575.

Chinese table of commodity imports was released after trade data, showing copper volume increased to 1.21 million metric tons in September against 1.15 million metric tons in August, a 5.04 percent increase in price term. The positive news could hold copper up from further decline past its current low at 2.3870.

GOLD TECHNICAL ANALYSIS – Gold dived to a low at 1153.05 after good Chinese trade surplus, temporarily detached from August high at 1170.16 after a second day testing it. Intraday momentum indicates a rebound in store so we may see prices re-test a previous resistance level at 1159.78. The gold bulls should take caution and adjust their stops if prices fails to return above this level.

COPPER TECHNICAL ANALYSIS – Copper’s decline since the US session actually sharpened after China imports data and the metal touched down right on 5-day moving average at 2.3870. Chinese copper imports provided some relief to deter this fall, hence copper is reaching up to a previous resistance-turn-support level at 2.3960. Recent upward momentum may be preserved if prices close above this level and the MA is not broken on the downside today. 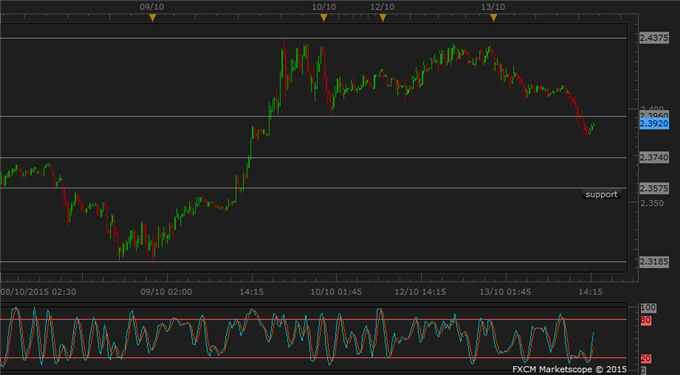 CRUDE OIL TECHNICAL ANALYSIS – WTI oil remained in range though it broke 38.2% Fibo support level yesterday. The decline stopped ahead of 10-day moving average at 47.33, whose breach would be an early sign of a reversal from the range top at 50.14-50.46. Downward momentum keeps this scenario viable. In which case the next support will be 20-day moving average at 46.48, before the lower bound of range at 43.59 (23.6% Fibo). 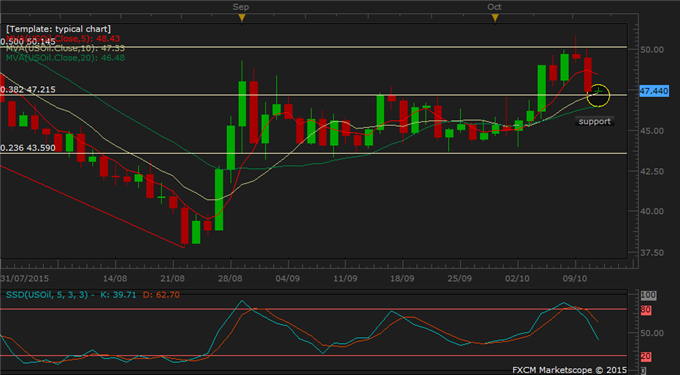