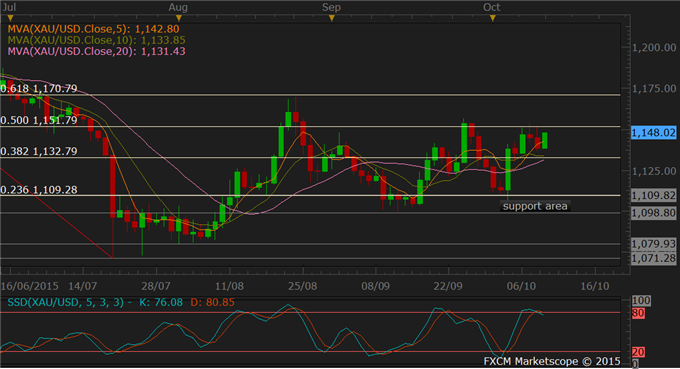 Minutes from the last Federal Reserve meeting indicated that policy makers will not rush to lift interest rates, therefore weakened the dollar across the board and lifted commodities prices. Equities and other G10 currencies also rallied, in the backdrop of expectedly dovish ECB minutes and slightly dovish statement after Bank of England held rate unchanged.

Copper surged 1.9 percent by Asian noon, just short of the 2.3960 recent top. Demand boost came as Chinese smelters piled up stocks to sell later, leading to a drawn down at exchanges. The London Metal Exchange’s inventories fell for the 9th day to the lowest since March, reversing a trend earlier this year that warehouse stocks swelled on faltering demand.

Copper prices have gone up over 4 percent during China’s Golden week and arbitrage profit abounds while the onshore renminbi (CNY) gained merely 0.12 percent versus the USD. However lukewarm economic data from China during the holiday including PMI signaled that demand would not pick up as quickly in the fourth quarter.

Oil rose past $50 psychological level for the first time since July and is heading for the biggest weekly gain since August. The influential group PIRA forecasted growing demand and lack of spare production capacity at a seminar in New York. OPEC Secretary General joined in the voices to predict demand will expand more than forecasted this year.

It remains to be seen if this rally could sustain above the $50 mark, amid little sign for a clamp down in supply. US producers shut down less-effective rigs and OPEC is getting into discussions, though neither has reduced output concretely.

Gold staged volatile swings together with the market’s interpretation of the Fed’s minutes. It dropped before the minutes then jumped to a high of 1151.41 on dovish perception (only short of 1153.75 monthly high), pared gains later as view changed to neutral, and rose again in Asia.

The precious metal will continue to be susceptible to major data and central banks’ hints at this close to the year-end i.e. deadline for a ‘hike or no hike’ decision. Higher moves are possible in the short term as it is relishing Fed’s rate delay stance.

GOLD TECHNICAL ANALYSIS – Despite recent wild swings, gold remained in range and capped by 50% Fibo at 1151.8. Momentum signals indicate exhaustion on the topside and an imminent reversal, which could bring focus down to a previous Fibo range between here and 1109 support. The gold bulls should be careful at repeated failures to break resistance.

COPPER TECHNICAL ANALYSIS – Copper broke above 23.6% Fibo again though failed to catch up with Oct 7 high at 2.3960. Copper has been on a rebound from a dip since beginning of October with focus firmly on the topside. This is not part of an uptrend and higher extensions will face strong resistance near September high at 2.4930, where a failure to break may result in a double top. Range traders may take advantage of this rise with tight stops. 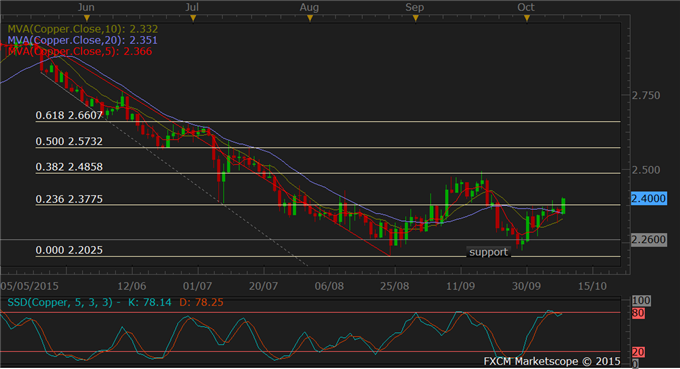 CRUDE OIL TECHNICAL ANALYSIS – WTI oil climbed over $50 and opened up the area above that, a very positive sign to the bulls. Moving averages have also aligned into uptrend signal while momentum continues building up. The test will be whether oil can sustain above this psychological mark until the end of this week and set the stage for higher prices next week. 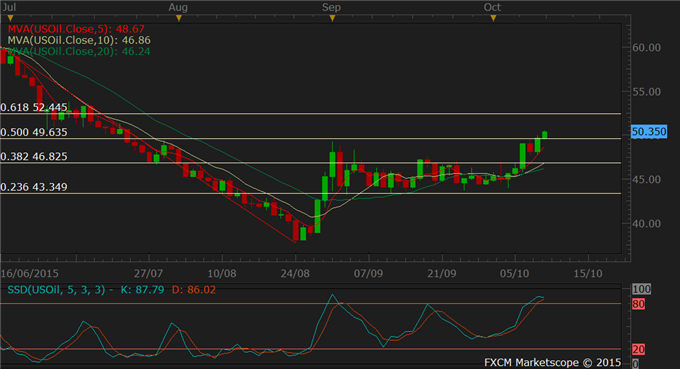