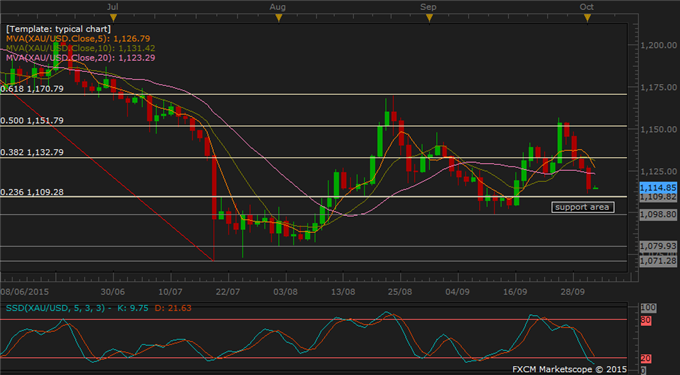 China starts the Golden Week today, an annual holidays until October 7 to celebrate the establishment of People’s Republic of China. Good data precedes the occasion with both official manufacturing PMI and Caixin final manufacturing PMI beating forecasts albeit lightly.

As a result, commodities and commodity currencies (AUD, NZD, CAD) rallied. Copper surged to a new weekly high and WTI oil climbed back above $45 mark.

Copper reached the highest since September 22 at 2.3685 following two positive China manufacturing PMI readings by the National Bureau of Statistics and Caixin/Markit. This outdid its overnight rally in Europe and US together with equities gains. The metal is fast approaching a technical resistance at 23.6% Fibo of 2.3775 though chances for a break above that is unclear.

Gold held losses on a fifth day of decline after U.S. ADP Employment exceeded expectation and raised hope for a good Non-farm Payrolls on Friday. The latter data is a prerequisite to interest rate hike and the last employment gauge before the Federal Reserve’s meeting on October 27-28.

Oil held ground above $45 mark owing to China factory gauge, after it rallied to a session’s high at 45.85 on signs of slowing supply from both sides of the Atlantic. Crude production from OPEC declined 233,000 barrels a day in September although still exceeded the group’s quota on a 16th month, according to Bloomberg. The U.S. Energy Information Administration reported a 7th weekly decline in production that was offset somewhat by a 3.96 million barrels stockpile increase.

Oil remains stuck in the 44.15-47.64 range, on its third day of gains. A break out on the topside is possible with momentum building up and that would be a good sign for the oil bulls.

GOLD TECHNICAL ANALYSIS – Gold plunged near 23.6% Fibo and support level at 1109.28, which will be the major hindrance to lower moves in the next few sessions. The gold bears should keep stops trailing this or the 1098.8 support below it in case of failure to break. Mixed signals do not shed light on which direction gold is heading next, especially before a major US employment data on Friday.

COPPER TECHNICAL ANALYSIS – Copper rode on the back of equities rally to a session high at 2.3575, a tad short of the 20-day moving average at 2.3670. A break above this MA would open up the area above that towards September high at 2.4930. Prices set for further upside today with clear upward momentum on the daily chart. The intraday support levels to watch are detailed below at 2.3185, 2.2930, 2.2695. 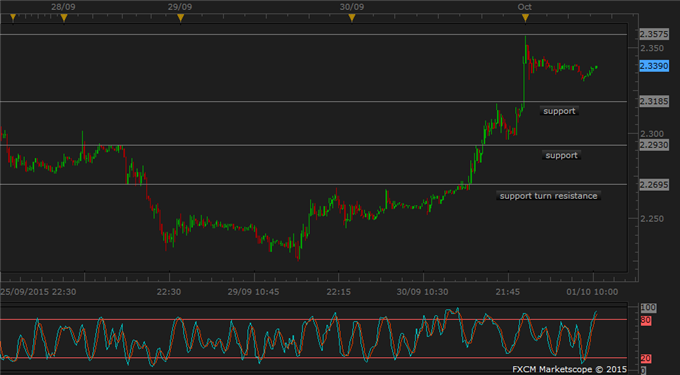 CRUDE OIL TECHNICAL ANALYSIS – WTI oil climbed back over $45 on a third day of gains, although it remained stuck in 44.15-47.64 range, or between 23.6% and 38.2% Fibo. Upward momentum is intensifying, which may support a break out on the topside. However range trades still prevail in the absence of directional signals. The bulls should keep stops near the upper bound in case failures to break may lead to a reversal. 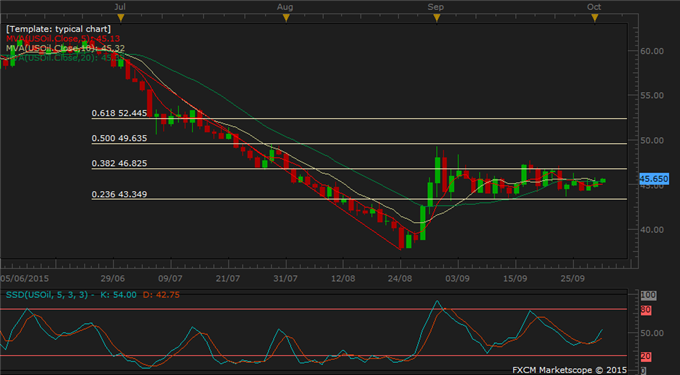