Asia market started the week on a high note with China’s stimulus in the way of mixed-ownership reforms for state-owned enterprises (SOEs). The State-Owned Assets Supervision and Administration Commission (SASAC) stated the goals to increase efficiency of state capital and make SOEs independent participants in the market.

However risk appetite following the measure quickly receded, in line with mounting losses in Shanghai stocks. Commodities will likely focus on China’s weakness and/or move in contrary to USD’s biases in this quiet market before US Federal Reserve meeting on September 16-17.

Oil gave back gains acquired after US House of Representatives nominally voted down an Iran nuclear deal that would subsequently open up Iran’s oil exports. The short-lived advances were echoed by a second-week of falling rig count and EIA’s projection of non-OPEC output cuts due to low prices.

Nevertheless, President Obama has enough support with the Senate’s backing to veto this verdict when the matter goes to Congress in September 17, coincidental to Federal Reserve’s rate meeting. Oil remains weak on the downside before this date, with even more losses in store if an approval is finally reached.

Nevertheless, gold prices were near one month low and investors rid of $2.6 billion value of gold during the last three weeks, through exchange-traded products (ETP). Although market priced in only 28% chance of a rate rise this week, probability for a rise by December still exceeds 50% and keeps a cap on gold.

Copper retreated with other industrial metals as soft China data on Sunday deepened concerns on weakness of the economy. Despite good retail sales, fixed assets investment came at 15-year low and industrial production missed forecast. This reverberated a popular view that China’s economic growth will likely miss the 7 percent target in this year.

On the other hand, the metal retained its new-found levels above 2.4200 due to supply shortage. Since September 9 a floor has been established in the range 2.4185 – 4210, which will likely contain the downside of copper coming up to FOMC.

GOLD TECHNICAL ANALYSIS – Moving averages indicate a downtrend is forming in gold prices, although momentum signals still point to the upside. Any ensuing correction at this early stage of trend formation will present opportunities for the bears to place shorts. Hence positions should not be hastily entered into. The firm support levels remain at 1079.9 and 1071.3. 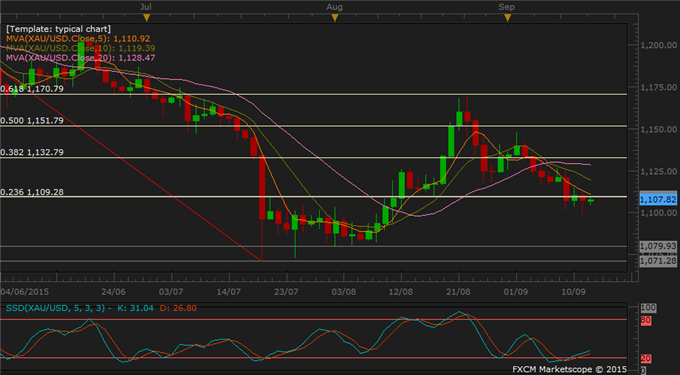 COPPER TECHNICAL ANALYSIS – Copper’s intraday prices generally adhered to a floor in the area 2.4185 – 4210 during last three sessions. The topside is seen to be capped by 38.2% Fibo at 2.4899. This range may contain prices until volatility picks upvia big USD moves after Fed’s rate meeting. The copper bulls may keep tight stops around this Fibo level. 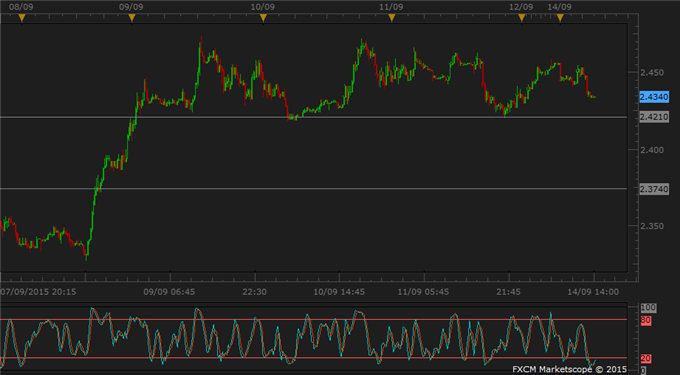 CRUDE OIL TECHNICAL ANALYSIS – WTI oil has stayed above 20-day moving average at 43.41 and the MA will likely support oil’s downside in near-term. Brent also experienced muted price action above a support level at 46.59. Like copper, oil is stuck in range in the absence of directional signals, though with an upside bias. Both bulls and bears may better wait for the outcome of Iran deal before taking medium-term bets. 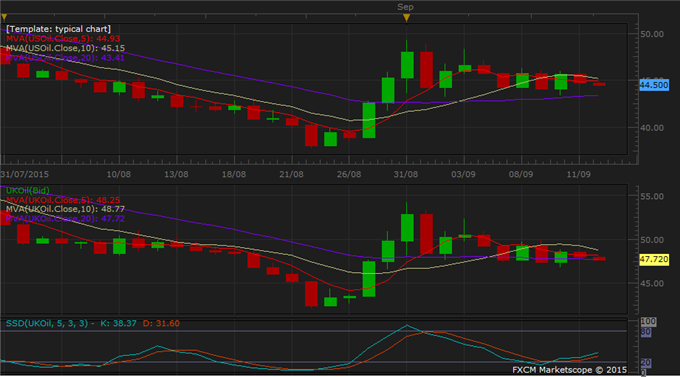