A series of political gatherings last week and this week made commodities more susceptible to macro events and drove up volatility. Last week’s strong rally met with price falls early this week.

Commodities opened in Asia with a downside bias as US dollar assumed modest gains after optimistic views on the US economy at Jackson Hole symposium restored rate hike chances in this year, on top of month-end USD demand.

Oil faded last week’s biggest two-day rally since 2009, although WTI oil stayed elevated at a safe distance above intraday support level at 43.45, followed by Friday’s low at 41.78. Brent mirrored these movements with intraday support in the area of 46.61-48.45. Both indicators fell over 1.5 percent by Asian noon time.

Oil fundamentals indicate a possible return of bearish sentiment as active U.S. rigs rose for six straight weeks to the highest since May, while Iran deal was only three votes short of being exempted from any veto by Congress.

Copper declined at a slower pace just as it rallied more moderately last week. Copper prices will likely be in abeyance coming up to China’s Manufacturing PMI data on Tuesday, from both official source and Markit/Caixin. This gauge of factory activity growth is expected to show a further decline, following a drop in Caixin’s flash figure on August 21.

Gold currently traded below 1136 in line with late Friday’s subdued levels, as the case for a rate hike this year found more support after Jackson Hole symposium. Given the overall uncertainty, gold will likely see more volatility throughout macro events and data releases this week. Gold prices continue to be supported around 20-day moving average, at 1120.7 today.

Looking ahead, China factory gauge on Tuesday, the European Central Bank’s Governing Council meeting on Wednesday, G20 meeting and U.S. Non-farm Payrolls on Friday will be milestones for investors in FX and commodities alike.

GOLD TECHNICAL ANALYSIS – Gold gains modestly today and support level remains 20-day moving average at 1120.7. High volatility abounds with a light upside bias amid mixed directional signals. The bulls should keep watch of past daily highs at 1140.9 then 1146.6. Today prices are currently capped by a weak resistance level at 1136. 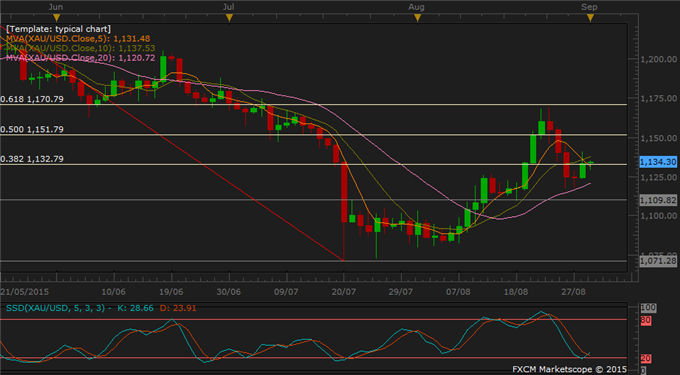 COPPER TECHNICAL ANALYSIS – Copper prices hover above 2.3180, a resistance-turn-support level that has come into play since Friday. The metal seems to stabilize after giving back gains acquired late on previous New York session. Copper’s daily chart still displays an upward momentum signal hence the fall in prices will likely be contained until China factory growth gauge is released tomorrow. 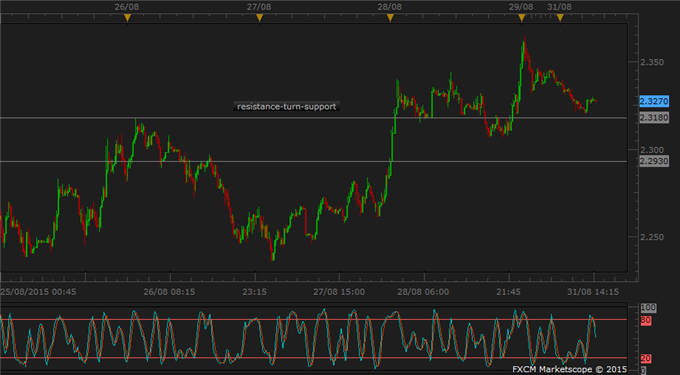 CRUDE OIL TECHNICAL ANALYSIS – WTI oil weekly chart shows the price climb halted ahead of 38.2% Fibo and 10-day moving average in the 47 region, although weekly upward momentum has not relented. Both WTI and Brent oil remain elevated above intraday support levels, at 41.78-43.45 for WTI, and 46.61-48.45 for Brent. Oil bulls should take caution with their stop loss. 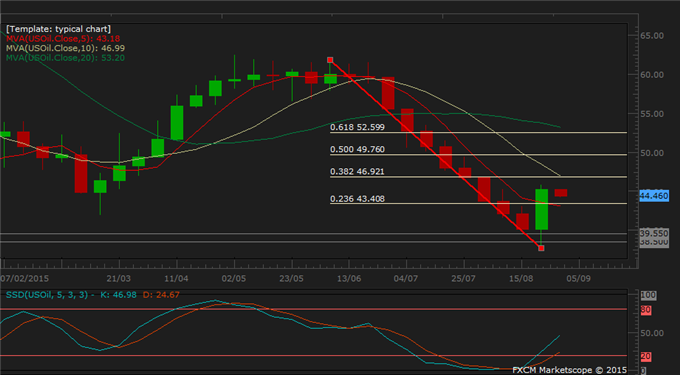