This morning the CNY was fixed at almost the same rate on Friday against the US dollar in another sign that China’s purported devaluation has completed. The new levels of exchange rate will likely trigger adjustments in short-term commodity demand. Prices were also under the pressure of US dollar strength after solid economic data.

Crude oil slumped to a fresh multi-year low last seen in 2009 on its way downward, as Baker Hughes Inc. reported a fourth consecutive week of oil rig increase. After fourty years of crude export ban and with US production at the highest level since, Bloomberg reported that the US Commerce Department had approved exports to its neighbouring Mexico as part of a one-year oil swap. This signaled another step toward eventually allowing U.S. domestic crude to participate in the world market which would intensify supply glut.

Iran’s representative to OPEC was reported to put the current oversupply at 3 million barrels a day, although the country bid to raise oil sales swiftly after export sanction is lifted.

Gold steadied after Friday’s reversal from its monthly peak, as China revealed it had added 1.1 percent to gold reserve in July. While currency devaluation faded, bearish calls on gold re-emerged as the US dollar is back in favour ahead of the Federal Reserve’s September rate meeting. The Fed’s minutes of its last meeting will be released on Wednesday.

GOLD TECHNICAL ANALYSIS – Gold’s peak and subsequent reversal late last week coincided with a downturn in momentum signals. Gold is now biased to the downside with a weak support level at 5-day moving average at 1113.36. The bears may watch out for opportunity to short gold at rallies toward last week’s high at 1126.63. 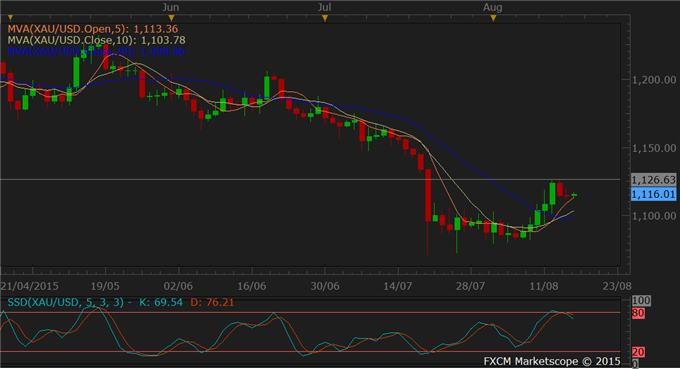 COPPER TECHNICAL ANALYSIS – The daily chart shows copper on another day of sideways movement capped between 20-day moving average at 2.386 and a floor at last week low of 2.292. There is still no signal for a resumption of downtrend since it was disrupted in early August. As momentum indicators remain rather flat, this correction period in copper may prolong and limit bearish trades. 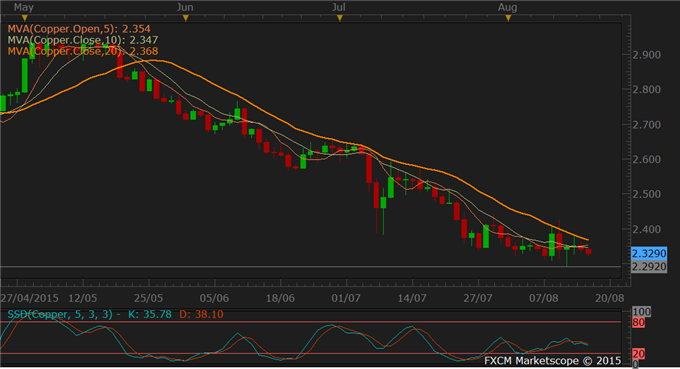 CRUDE OIL TECHNICAL ANALYSIS – Today WTI oil paused ahead of yesterday fresh multi-year low at 41.60. Its downtrend signal remains firm so this support will be the level to watch in the next few sessions. With momentum signals already below their lower bound of the usual range, upcoming declines may materialize rather gradually. Resistance level is found at 5-day moving average at 43.13. 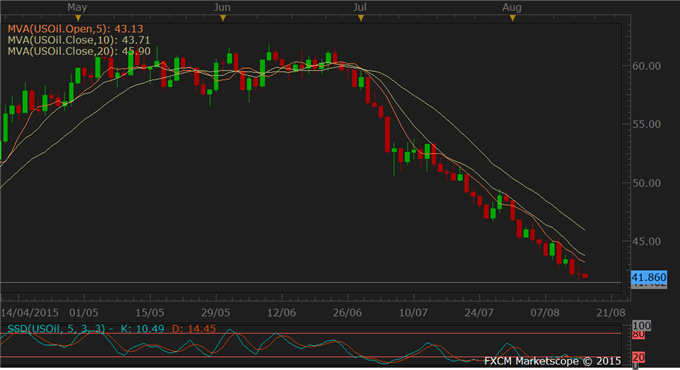