Oil was under pressure overnight from China demand concerns, persistent supply glut, and US dollar strength after a firm July Retail sales data. In the US, Genscape reported a weekly stockpile rise of 1.3 million barrels at the Cushing delivery point. This widened the supply-demand gap after a series of refinery outages this week including Whiting, the biggest refinery in the Midwest.

Around 8am Sydney time, WTI oil crashed2 percent in what was deemed to be a one-off selling after stop loss was triggered. Prices have since climbed back to the $42 region, in line with intraday levels before the incident. Oil outlook remains weak with WTI oil on a seventh week of decline and Brent struggling to climb back above $50 figure.

Short term oil trading became tougher as prices tank near yearly low and volatility surged to levels last seen in April. Intraday support of WTI oil is likely found at 41.73. Brent displayed an upside bias above support level at 48.60, on its last trading day of the September futures contract.

Gold lost ground as its safe-haven status faded after the China’s central bank (PBoC) indicated that yuan devaluation was under control and exchange rate should stabilize in due course. PBoC reinstated its plan to keep the CNY stable at yesterday’s press conference, and today lifted yuan fixing rate for the first time since the devaluation started.

Gold should see more downside bias as it lowers towards a resistance-turn-support level at 1109.82.

Copper traded sideways within yesterday’s band as China calmed the market from its currency shock. The pick-up in Chinese stocks should keep copper elevated above this week’s low at 2.2920. Copper and industrial metals still digest the implications of a weaker yuan, which would immediately limit China’s purchasing power and therefore demand, while boosting exports and factory activities in the long run.

Copperis biased downside after yesterday’s prices failed to rise above the 20-day moving average at 2.376.

GOLD TECHNICAL ANALYSIS – Gold turned to the downside after yesterday’s prices almost formed an inside-day. Momentum signal has peaked as we spotted yesterday, hinting at further falls in the near term. Immediate support is found at 1109.82 and below that at 10-day moving average at 1100.74. The gold bears may look to sell at rallies while the gold bulls should keep tight stops and consider unwinding positions. 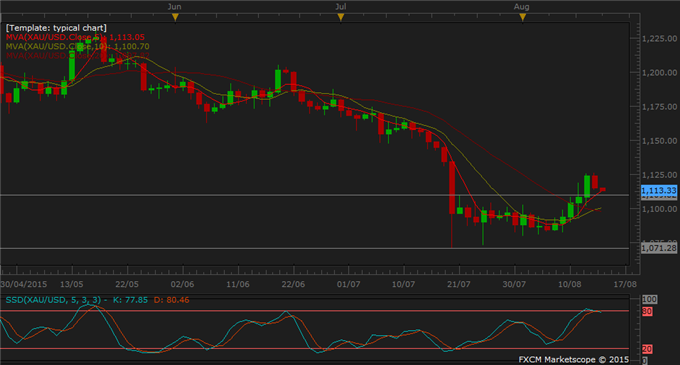 COPPER TECHNICAL ANALYSIS – Copper stayed flat, capped by 20-day moving average at 2.376 after it failed to break the resistance yesterday. Little action is expected in copper prices today. Traders should expect more consolidations next week, and look to opening prices for clues of the week’s trading band. 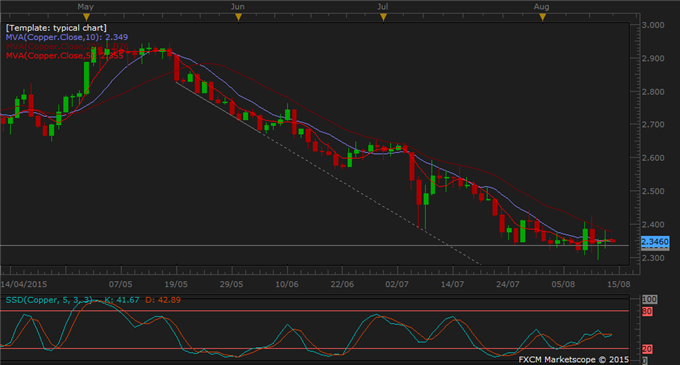 CRUDE OIL TECHNICAL ANALYSIS – WTI oil quickly returned to levels above 41.73 after a sudden crash toward 39.55. Intraday momentum has waned and today prices will likely stay within this new-found range of 41.73-42.68.

On the weekly chart, downtrend signal is firming up as WTI sets to complete the seventh week of lower-high and lower-low prices. Therefore further falls are possible, with weekly support levels found at today’s 39.55 and a weekly low of 38.50 back in 2009. 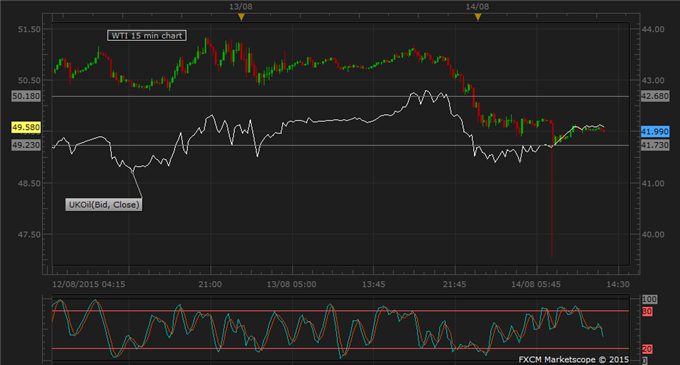 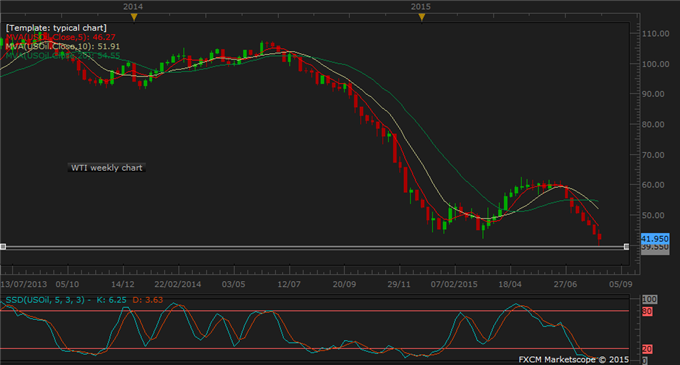