Gold lost 0.6 percent this week in the worst weekly decline since 2004, ahead of the release of U.S. Non-farm Payrolls (NFP) on Friday in the US. This data is highly watched as part of the Fed’s considerations regarding their upcoming interest rate decision. A higher rate would stifle demand for gold and depress its prices. Little action is expected prior to the event, where a good number would likely spur gold to fall below the lower bound of its current range at 1071. Gold bears should get ready to trade the news.

Oil reversed yesterday’s losses as EIA’s report of falling inventories gradually captured attention, although Brent remained below $50 and WTI lost 5 percent in a sixth weekly drop. Overall, the supply glut continued with US stockpiles at more than 90 million barrels above the five-year seasonal average. Oil prices should remain under pressure until more concrete signs emerge of a demand pick-up, via activities in the US, China and other markets.

Copper dropped near last Monday’s six-year low as the market positions for important China data on Saturday and a potential strengthening of the US dollar post-NFP. China’s trade balance, exports, and imports tomorrow will provide a glimpse into copper demand in the world’s biggest consumer. A nearly 2 percent gain in the Shanghai Composite by Asian noon time today helped to stem further losses in the metal.

GOLD TECHNICAL ANALYSIS – After yesterday’s gains, gold looked to the downside today amid a quiet market. The 1071-1109 range firmly captured daily movements with no sign for a break out yet. The below weekly chart displays a downtrend signal in moving averages that has started since prices dropped below 1109. The floor at 1071 is a hurdle for this downtrend formation and a critical level to the gold bears. 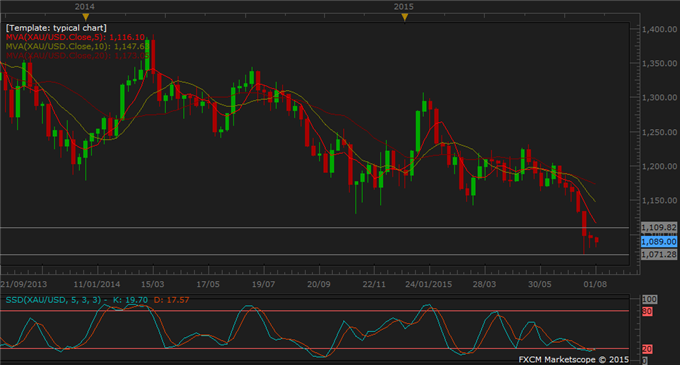 COPPER TECHNICAL ANALYSIS – Copper descended before Asian noon time with a light downward bias for the day. No change is seen in the daily chart and copper may continue to fluctuate within the range. Volatile prices are expected before and after economic news on Saturday, providing opportunities for range trade. A breach of Monday’s six-year low at 2.3200 would open up the downside and enhance downtrend resumption. 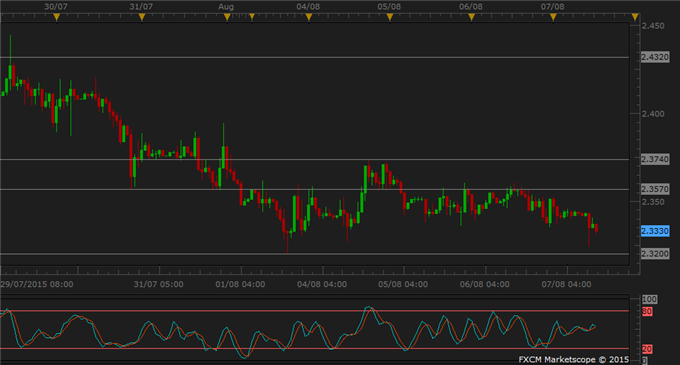 CRUDE OIL TECHNICAL ANALYSIS – Oil rebounded after yesterday’s dip toward this year’s low. Upward intraday momentum may lead Brent prices to touch up to $50 mark. Nevertheless, there is no sign that the July-August downtrend has finished, although this turn of tides may trigger a consolidation at current levels. Oil bears may sell WTI at rallies up to the 10-day moving average at 46.48. 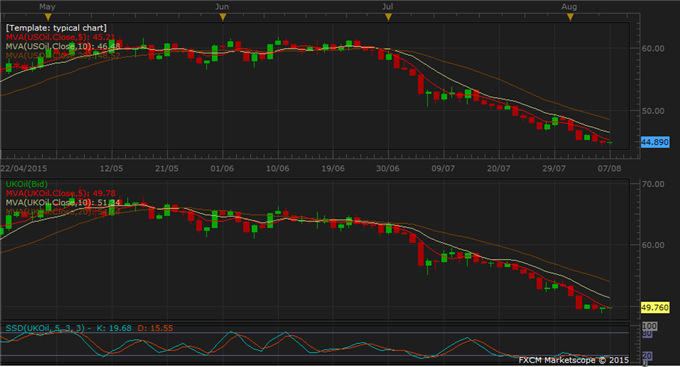