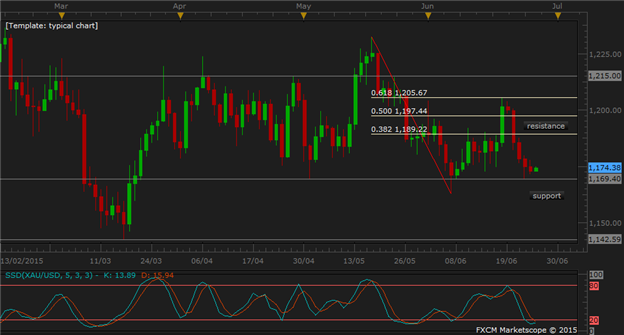 Gold managed to edge off a two-week low at 1169.30 despite recording a fifth consecutive daily decline. Tensions over Greek debt negotiations helped to trigger buying interest. These ongoing events will continue to impact price action until the end of this week. Prices conformed to yesterday’s range in Asia with little sign of an extension lower. Resistance levels ahead are daily highs of the past two days, at 1178.00 and 1180.10.

However, the long-term outlook remains dampened by expectation of an increase interest rate in the US, which would have an adverse effect on demand for gold.

Crude oil prices dropped for a second day as production hit a near-record high. The EIA weekly report showed that crude output had increased to 9.6 million barrels a day through to June 19, despite a continuing fall in stockpiles. Supplies were reported at 84 million barrels, a reading above the five-year average for this season. Price volatility has also slid to the lowest in seven months, as indicated by the Chicago Board Options Exchange Crude Oil Volatility Index.

WTI is lingering above a two-week low of 58.71 and this week’s low of 59.26. These support levels may hold out during the Asian session and ahead of the weekend. Brent looks to the downside but seems well-contained above support at 61.13. On-going political events in Europe regarding the Greek debt crisis also add downward pressure on prices of oil and other commodities.

Copper prices stabilised after three straight days of gains. Price gains stemmed from strong US data that bolstered prospects for economic growth, which in turn bodes well for copper demand. US consumer spending increased 0.9% from the previous month in May, the fastest rate in nearly six years.

Nevertheless, upside constraints are in place including expectation for lower demand in summer and the impact of current Greek debt deadlock. Copper detached from its recent higher-high pattern to linger below the 2.6500 mark, the 24th June high. Monday’s opening range will shed more light on whether this correction range will continue into next week.

GOLD TECHNICAL ANALYSIS – Gold paused its lower-low pattern in yesterday session and is currently hovering over multi-week support level at 1169.40. Momentum shows signs of exhaustion, making a break unlikely during the rest of this session. Firm support comes in at 1162.60, the June low. Topside resistance levels are found at past daily lows of 1178.00 and 1180.00.

COPPER TECHNICAL ANALYSIS – After an upward correction earlier this week, copper prices have stabilized in the last two sessions. Attention has now turned to topside resistance at 2.6500 that was reached mid-week. Another contest of resistance today would help to build momentum for higher prices on Monday. On the other hand, a lack of contest today may see copper remain within the range early next week. 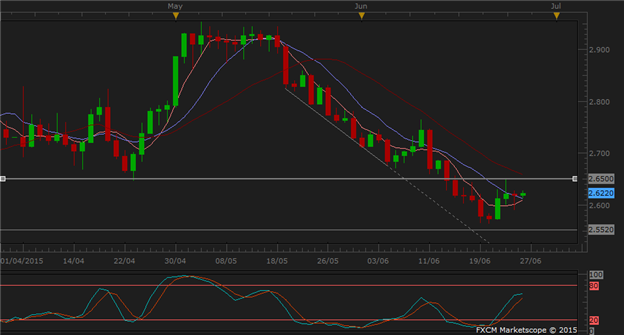 CRUDE OIL TECHNICAL ANALYSIS – WTI crude oil shows no sign to break out of the recent April-June range, though the bias has favored the downside in the last few sessions. Support of 57.71, the 23.6% Fib, is at a safe distance below. After Wednesday’s touch up to the 61.50 region that largely capped June movements, WTI prices retreated yesterday and is looking toward the downside for the rest of this week’s trading session. 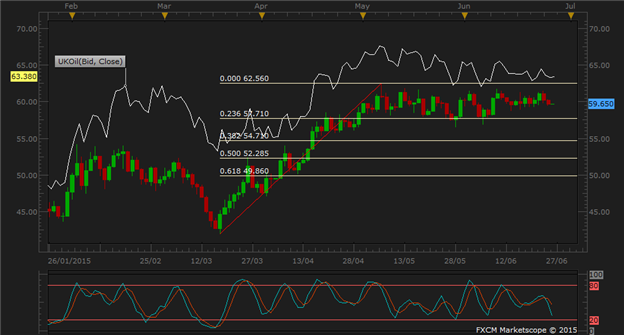