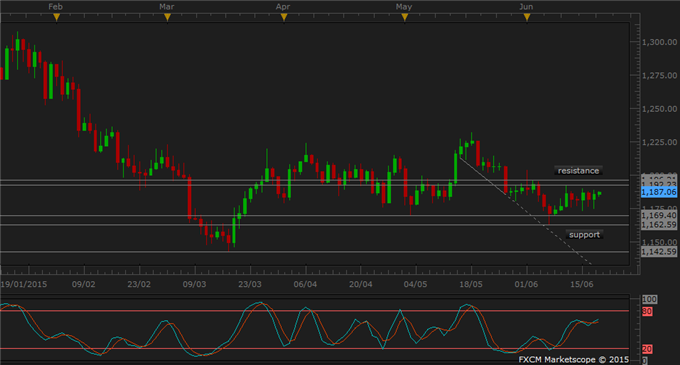 The US Dollar was broadly sold after the FOMC statement came out with a slightly less hawkish tone than expected. This and continued stalemate in Greek debt talks kept gold prices afloat. The latter will capture market players’ attention for the rest of this week as Eurogroup financial ministers meet today to vote on a new leader. Overnight, Greek Prime Minister Alexis Tsipras said his country “will not say yes to demands not in line with what [their] government proposed” in a speech to Parliament, making a resolution further out of reach. The possibility for weakness seems lower in the near term, although sellers may opt to hold on to their positions and maintain stop-loss levels. Resistance remains at 1192.23 pending any drastic risk-off developments coming out in Europe that may drive prices higher.

Copper pulled back today after sinking to a 3-month low in the previous session, thanks to a weaker US Dollar. However, this does not change the fundamental picture as stockpiles and weak demand from China continue to drag on prices. Futures prices also slumped to a 12-week low on mounting concern that Greece’s debt crisis may erode demand for industrial metals in Europe. Any risk aversion triggered by events in Europe may add to downward pressure.

Crude oil fell after weekly inventory data revealed an unexpected increase in gasoline stockpiles and substantial increase in reserves at the pivotal Cushing, Oklahoma storage hub. However, the Fed’s statement and the US Dollar weakness that followed offered a lift to prices. An EIA report saying supplies declined on a seventh straight week while weekly production decreased also helped. Both Brent and WTI benchmarks are locked in prolonged consolidation. Brent is very close to year-to-date trend support and may break or bounce off the level.

GOLD TECHNICAL ANALYSIS – Gold stayed afloat in today’s Asian session, hanging below immediate resistance 1192.2 with no sign of a break as momentum remains flat. All signs point to prolonged sideways movement, suggesting the May-June downtrend is on hold for now until another contest of resistance and subsequent break or failure may bring back volatility.

COPPER TECHNICAL ANALYSIS – Copper’s losing streak paused in Asian trade ahead of support at 2.5920, with RSI momentum signaling a rebound from this level is more likely than a further fall towards trend linesupport. Temporary post-FOMC US Dollar weakness has helped lift up copper but downward momentum may return once this wears off. Sellers may keep stops trailing past daily highs. 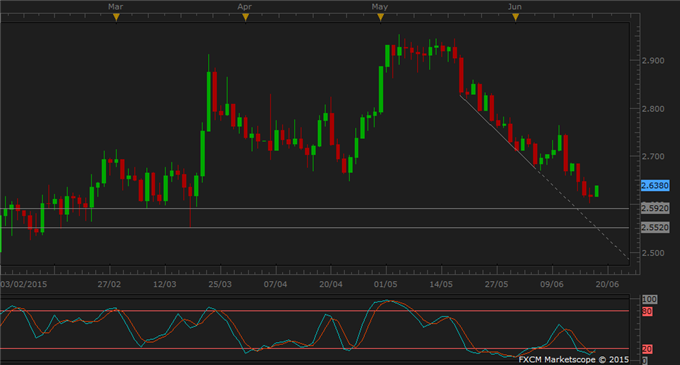 CRUDE OIL TECHNICAL ANALYSIS – Ranging continues, with interesting levels to watch in Brent as it edges closer to trend line support at 62.66 after narrowly holding above it yesterday. A break may trigger stops by medium-term long holders but this would only be a sign that Brent will continue ranging and that some downward pressure is building up. The next support level is at 60.92, the 5 June low. 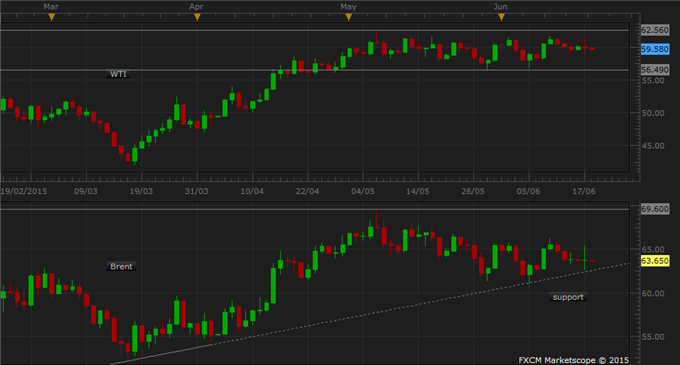