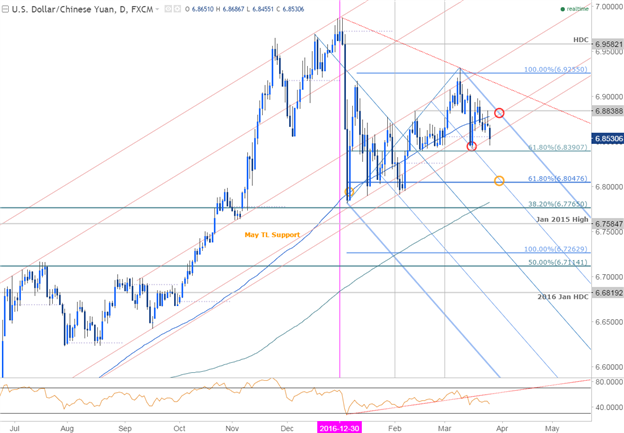 - The USD/CNH is testing a major support. Watch key levels next.

- The PBOC Governor addressed on investment negotiations between China and the U.S.

USDCNH is testing the monthly opening-range lows with key support seen at the 61.8% retracement of the January rally at6.8391. The pair has been trading within the confines of a well-defined descending pitchfork formation with the upper median-line parallel highlighting resistance & near-term bearish invalidation at 6.8839- note that this level also converges on the February high.

The near-term focus remains weighted to the downside while below this region with a break lower targeting confluence support at 6.8048 where the 61.8% extension of the decline off the yearly high converges on the 50-line of the operative slope. Subsequent support targets at 6.7765-6.7818 (38.2% retracement & the 2017 opening-range low). From a trading standpoint we’ll favor fading strength while below the upper parallel with a break of the range lows targeting subsequent support objectives.

- China’s Central Bank released the full text of Governor Zhou Xiaochuan’s speech at Boao Forum this weekend. “China has been conducting negotiations on a bilateral investment treaty with the U.S., though some of the talks have been suspended. China is waiting for the new U.S. government to decide how to move forward on these talks”, according to the Governor.

This indicates that the outlook of trade and investment between the two countries still has some uncertainty. This may not be good news for the Chinese economy, as it has already experienced slow growth in exports and imports.

The Chinese regulator has been strengthening oversight on cross-border Yuan transactions and this is likely continue to be the case in 2017. As of March 27th, the “Big Three” Chinese Bitcoin trading platforms, BTCChina, OKCoin and Huobi, have not yet removed restrictions on Bitcoin withdrawals, which came into effect following a series of inspections on illegal cross-border transactions launched by the PBOC.

- In the first two months of 2017, China’s state-owned enterprises (SOEs) made a profit of 201.86 billion Yuan, rising +40.3% compared to the same period last year, according to China’s statistics bureau. In specific, oil, petrochemical, coal and steel industries that experienced major losses last year, all reported gains this January and February. This is likely driven by soaring energy prices. On the other hand, machinery and electricity companies reported significant drops in profits, likely led by the same reason - higher energy costs.