- The Yuan weakened against the U.S. Dollar following the release of China trade deficit and weak exports prints in February.

- China posted a trade deficit in February, the first time in three years. In the Yuan term, imports expanded +44.7% while exports only grew +4.2%; this led to a trade balance of -354.5 billion Yuan. In the U.S. Dollar term, imports jumped +38.1% while exports contracted -1.3%; the trade deficit in the month was -$9.15 billion. A large trade surplus in January as well as China’s Lunar New Year may have contributed to the deficit in February, as after combining the first two months of 2017, China maintained a trade surplus of 293.7 billion Yuan. 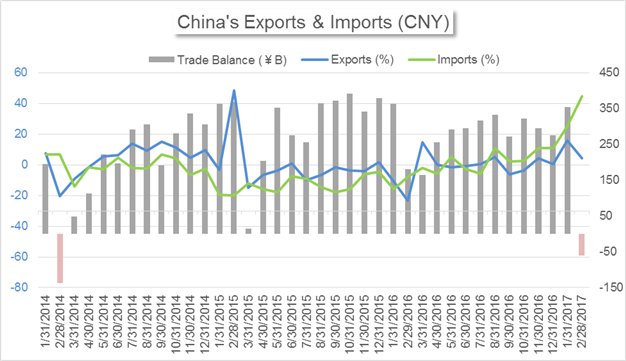 In specific, the U.S. remained as the second-largest counterpart to Chinaafter the European Union, despite of the U.S. President Trump’s talks on international trade. China’s exports to the U.S. increased 11.5% in February, lower than the 17.2% rise in January; imports from the U.S. expanded 41.0%, beating the 36.7% increase in January. China’s trade surplus to the U.S. narrowed by -3.5% in February from the month prior. However, it is common to see changes in trade figures over months and too soon to say any significant shift in trends.

Following the release of the trade data, the Chinese Yuan weakened against the U.S. Dollar to 6.8994 within the first five minutes. This is likely because that the trade deficit was a surprise to the market; also, weak exports may increase expectations that China would prefer a weaker Yuan over the following periods. 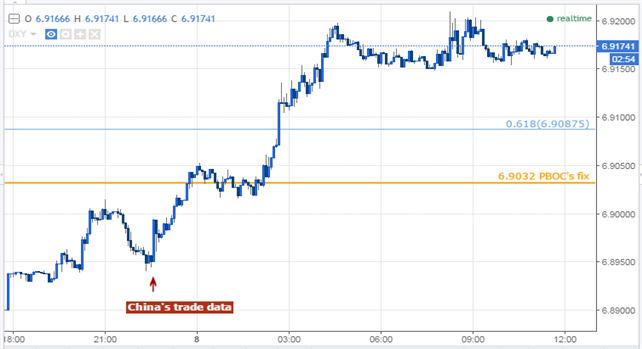 As of 12:40 pm EST, the offshore Yuan has extended losses against the Dollar, with the USD/CNH hitting 6.9169, above the PBOC’s guided level.

- Chinese government’s 2017 work report may hint at changes in the Yuan exchange rate target for the year. It is not what are included in the report; rather, it is what are missing. In the 2015 report, it is stated that “to maintain the Yuan around reasonable levels and increase two-way flexibility in Yuan rates”. In the 2016 report, it is mentioned that “to maintain the Yuan relatively stable around reasonable levels”. Yet, the 2017 does not include such statements; instead, the targets relevant to the exchange rates are “to reform the Yuan to become more market-driven” and “to maintain Yuan’s role in the global currency system”.

A more market-driven Yuan indicates regulators’ tolerance on elevated volatility. In terms of the global role, Yuan’s share in global payments has been dropping, according to SWIFT. Therefore, promoting Yuan’s use in a broader scope could be a major exchange rate task in 2017.