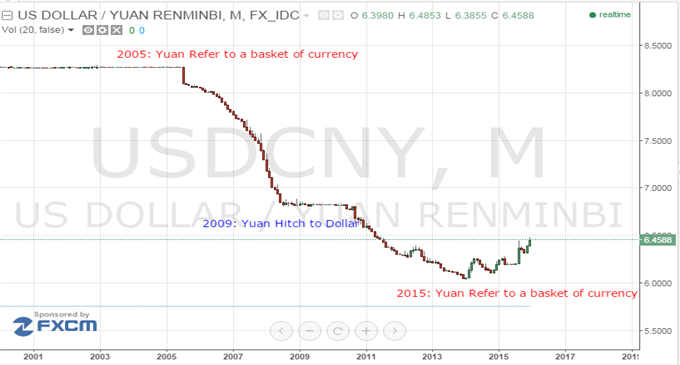 The CFETS, a branch of the central bank of China issued a commentary for the new Yuan Index and made important interpretations for index itself and the yuan exchange rate regime. The CFETS is a branch of PBOC located in Shanghai which is authorized by PBOC headquarters to publish market data on a daily basis.

It is actually not the first time that China decided to adopt a yuan exchange rate regime based on market supply and demand, referred to a basket of currencies and under managed floating. On July 21, 2005, PBOC made an official announcement to launch such an exchange rate formation regime. Then the yuan onshore rate started to appreciate against the dollar after remained fixed at around 8.28 for 10 years. In early 2009, due to the global financial crisis, the Chinese regulators decided to hitch the yuan to the dollar again until now.

The short-term purpose of de-pegging the yuan to the dollar is to prepare for the Fed hike in the following days and gives yuan more flexibility to move away against the dollar. The longer-term purpose, more importantly, is to make the yuan movements consistent with the development of China’s economy.

China choosing to hitch yuan to the dollar in early 2009 was to stabilize the economy during the global financial crisis. Both China’s and US’s economy were moving into the same direction at that time—into a downtrend. However, after six years, China and the US are in different places. The US has seen a gradual recovery with growing employment and stable inflation, while China is trapped in slow growth amid falling export and foreign reserves numbers. As a result, maintaining the same trend in currency movements as US does is no longer a good choice for China. Remember, a lot of countries in the European Union struggled in the past as they had to follow the monetary policy mainly determined by Germany yet not fit for their own economies. Thus, China would rather to keep independent on its monetary policy.

In the commentary, it is also said that [PBOC acknowledges that] it will take time for the market to adjust and adapt to the new exchange rate regime. In addition, in general speaking, all the available yuan indexes indicate that the yuan exchange rate has been relatively stable against a basket of currencies since the beginning of this year.

The central bank now redefines the meaning of the stability of yuan. Yuan’s relative stability to a basket of currencies—especially to its trading partners—now matters more than solely its exchange rate versus the dollar. The CFETS index and Bank of China’s OBOR Yuan Index, another new issued index, are both trade-weighted indexes. It means that the central bank guides the market to see the Chinese currency from a trade point of view. And this also leaves room for yuan to move away from the dollar not just in this week but in a longer term.