The New Zealand Dollar is off to a weak start as the trading week kicks off in the Asia-Pacific region. A downbeat Performance of Services Index (PSI) from BusinessNZ crossed the wires this morning. The August reading fell to 35.6 from 57.9 in July. That marks an activity contraction and the second consecutive slowdown from June.

NZD/USD is slightly lower in morning trading. A fragile global Covid situation along with valuation concerns in equities saw the safe-haven US Dollar gain as risk assets sold off last week. New Zealand downgraded level four lockdown restrictions across much of the country. However, Auckland – the country’s most populous city – kept strict measures in place. Those restrictions may extend past this week, with an announcementdue today.

Traders are eyeing several potentially high-impact central bank rate decisions set for this week. The Bank of Japan’s policy decision will cross the wires first on Wednesday. The Federal Reserve is also on tap for Wednesday’s US session. Finally, the Bank of England will report on Thursday. All three central banks are expected to keep their benchmark rates unchanged, according to Bloomberg surveys.

Meanwhile, traders will focus on a potential credit crisis in China. $300 billion in debt saddles the Chinese real estate titan Evergrande. Credit markets began to show stress after the company revealed that it is unable to sell assets quickly enough to service its debts. Now, a potential default on payments owed to two large banks on Tuesday threatens to roil credit markets further.

Some are drawing similarities to the 2007 US financial crisis when a housing market collapse caused a global recession. This likely explains part of the risk-off move in financial markets over the past couple of weeks. This situation presents a systemic risk unlike anything traders have seen since the Covid pandemic started.

The New Zealand Dollar is tracking lower against the US Dollar, following its downward trend from last week. Prices broke Bull Flag support last week, ending chances for a breakout. The 50-day Simple Moving Average is in focus after NZD/USD pierced the 38.2% Fibonacci level and a prior level of support. That said, further weakness may be likely in today’s session. 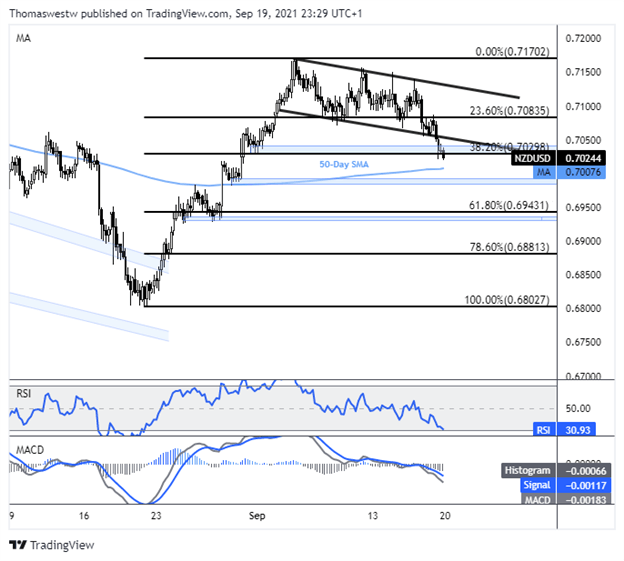