The safe-haven Japanese Yen benefited against most of its peers last week as a bout of risk aversion rippled through financial markets. Risk-sensitive currencies performed poorly, with the Australian Dollar losing nearly a full percentage point against JPY. The US Dollar fared much better being a haven currency itself, with USD/JPY nearly unchanged last week. Overall, however, the Yen has benefited over the last couple of weeks as surging Covid cases pushed growth slowdown fears.

Still, the Yen has yet to recover a substantial portion of its earlier year losses when analysts and economists were solidly optimistic about a strong economic recovery. Those upbeat economic forecasts put a hit on the safe-haven currency, displayed in the exchange rates below. The Delta strain's emergence over the summer months saw Yen strength move back into the fold, with the move being most notable in AUD/JPY. That’s no surprise, given the wave of lockdowns in Australia over the summer. 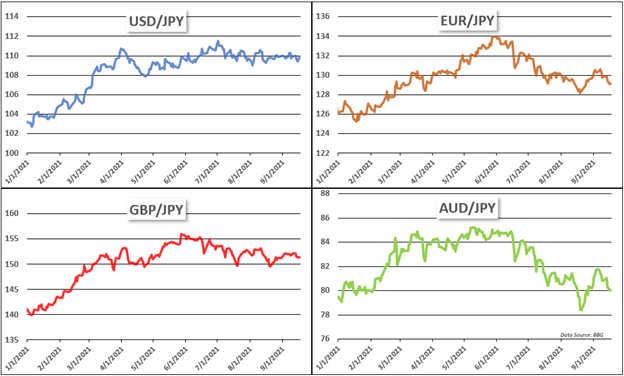 Covid’s Delta wave started to strain economies in June, which saw investors move out of risk assets and into more defensive positions. Global economic data prints, including retail sales, PMIs, and labor market data, started to slip relative to expectations. The chart below illustrates this relationship through the global Citi Economic Surprise Index and AUD/JPY. Given that economic data prints relative to estimates are still trending down, meaning analysts are overestimating the global economy’s strength, AUD/JPY may be the best candidate to play the move lower. 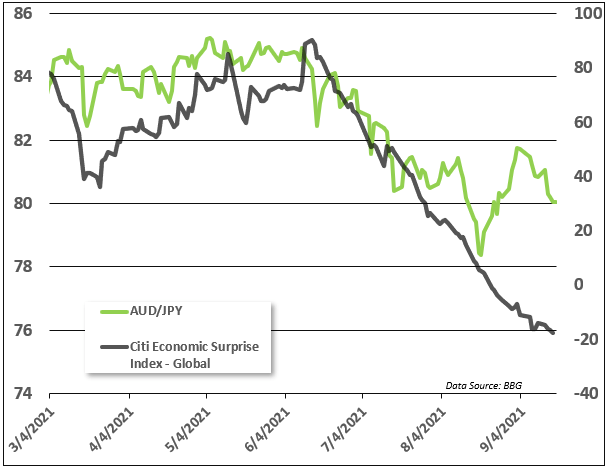 Yen traders will be watching the Bank of Japan’s interest rate decision set to cross the wires on Wednesday. The Bank of Japan (BoJ) is all but certain to keep its easy monetary policy in place. Inflation has picked up due to rising material costs, but domestic consumption remains weak. Instead, the central bank may downgrade its economic assessment to reflect the latest virus impacts.

Later in the week, Japan will release inflation data for August. Downward price pressures have eased in recent months, with July’s consumer price index (CPI) rising to -0.3% from April’s -1.1% print. Analysts expect CPI to cross the wires at -0.3%, according to a Bloomberg survey. A better-than-expected print is unlikely to alter the central bank’s policy path in the short term.

Moreover, the island nation’s exports for August saw a third consecutive drop in August. Covid impacts around the globe are sapping demand for Japanese goods, further pressuring the domestic economy. China – Japan’s largest export destination -- is suffering from a lull in consumer demand due to sporadic yet persistent lockdowns along its coastal cities. Retail sales for August fell to 2.5% from 8.5%,

Overall, the Yen’s path forward next week will likely remain driven by safe-haven flows and the broader market’s direction. The Bank of Japan rate decision and CPI data, while important to the Yen at a more granular level, is unlikely to have an outsized impact. Political factors within Japan may also affect Yen direction as the country prepares to select its next leader for the governing Liberal Democratic Party.