Asia-Pacific markets may see a positive continuation to Monday trading when regional equity indices traded mostly higher. The risk-sensitive Australian Dollar pushed modestly higher overnight versus the US Dollar, with AUD/USD holding above the 0.77 handle after a weak start to the trading week. Wall Street traded higher, with technology stocks outperforming.

However, volatility rose via the VIX index, also known as the market’s “fear gauge”, while the bond price rally lost steam. Treasury yields moved higher as the Federal Open Market Committee (FOMC) prepared for a two-day policy discussion. Fed members are in a growingly difficult spot regarding policy.

After months of calming markets in the face of rising inflationary pressures, the Fed faces a pivotal moment following hotter-than-expected figures in not only inflation, but also price expectations. Will the Fed change its tune regarding the transitory inflation narrative and shift to a hawkish policy outlook? If so, it will likely cause a run in Treasury yields and, in turn, push the US Dollar higher. That outcome would likely have negative implications for global markets, hence the close eye traders have on this week’s policy decision.

Specifically, the Fed’s dot plot – a chart used to communicate its forecast on rates – will be watched closely. The median projection may show a shift left on the timeline for an interest rate hike, with 2023 being the new possible median target. The move would likely rile markets as the war drums of an approaching tightening cycle become audible across trading desks.

Elsewhere, iron ore prices are taking a small step back after prices rose to a fresh record high on China’s domestic futures market. The industrial steel commodity is on track for its third consecutive monthly gain after an iron ore mine in northern China flooded late last week, trapping 13 workers. The Australian Dollar – a typical beneficiary of higher iron ore prices – remained largely subdued, however.

Speaking of the Australian Dollar, the Reserve Bank of Australia’s (RBA) meeting minutes will cross the wires today. While the minutes may provide further insight into RBA policy makers’ recent decisions, the focus remains on the July meeting when the central bank is expected to alter its quantitative easing program. Fundamentally speaking, the Australian Dollar looks ready to move higher in the coming weeks.

The Australian Dollar has been under pressure against the US Dollar as of late, riding a trendline from the May swing high lower after briefly surging above the former resistance level. A recent bearish crossover between the 20- and 50-day Simple Moving Averages (SMA) cast additional negative technical pressure on the currency pair.

The MACD oscillator is trending lower below its signal line, while the Relative Strength Index (RSI) remains slightly below its neutral 50 mark. Support at the 23.6% Fibonacci retracement level could underpin price in the coming days, but a drop lower could see price fall to the June low near 0.7660. Alternatively, a move higher may see resistance at the 38.2% Fib level or the 20- and 50-day SMAs. 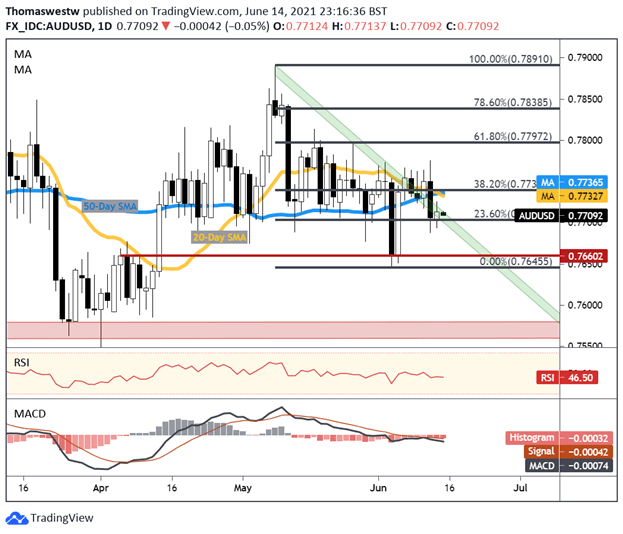