A modest wave of risk-aversion rippled through markets on Tuesday during the New York trading session, where despite upbeat earnings reports, US equities moved lower for a second consecutive day. Small-cap stocks lead the charge lower, with the Russell 2000 index dropping nearly 2% on the close, but losses were broad throughout the major indexes.

In line with the risk-off move seen in equities, government bonds shifted into favor, with Treasury yields shifting lower across the curve as demand drove prices higher. The 10-year Treasury rate dropped nearly 3%. The pullback in risk-taking comes despite what has been an upbeat earnings season, which has seen rosy numbers from companies like Johnson & Johnson and Procter & Gamble Co. Netflix, however, sank after-hours on Tuesday after the streaming company posted a miss on subscribers. Next week will see technology stocks move into focus, with several high-impact earnings sketched on the calendar.

Procter & Gamble stoked some inflationary concerns Tuesday when the consumer product company announced prices throughout their lineup will soon increase. Investors and economists have been expecting to see higher prices as the economy reopens from the Covid pandemic, although no significant uptick in core CPI or PCEhas emerged thus far.

Speaking of inflation, New Zealand reported price figures for Q1 early Wednesday morning. The island nation’s economy saw a 1.5% increase on a year-over-year basis versus a consensus expectation of 1.5% YoY. The inflation figure may inject further hawkishness into the RBNZ’s policy outlook, which may translate into a stronger New Zealand Dollar.

Australia’s retail sales print for March will highlight Wednesday’s economic events, with analysts expecting a 1.0% figure for the preliminary reading, according to the DailyFX Economic Calendar. Elsewhere, Indonesia will report business confidence for Q1, and Japan will release foreign bond investment data. India’s Nifty 50 will close for trading for the rest of the week for the Ram Navami holiday.

The Nasdaq 100 may have more room to fall judging on its technical position. The technology index shifted back below its February multi-month swing high. Trendline support may underpin prices if an extended selloff takes place. Subsequent support in the 20-day Simple Moving Average (SMA) and 23.6% Fibonacci retracement may preserve a more bullish narrative, however. 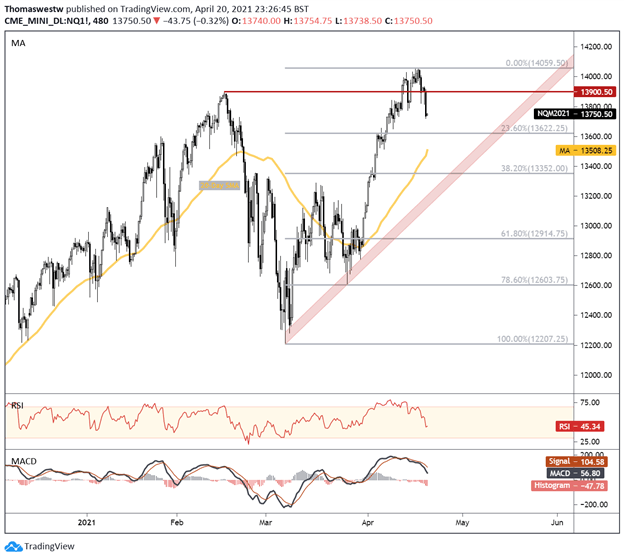