Despite the initial volatility injected into markets from the downfall of Mr. Hwang’s highly leveraged family office blowup, markets remain near all-time highs. On an intraday basis, the S&P 500 broke into record territory on Wednesday. The 4,000 level appears to be offering a formidable ceiling of potential resistance, however. Bulls may attempt to clear the level shortly now that the quarter has drawn to an end along with the quarter-end rebalancing that comes along with it across assets.

Elsewhere, the US Dollar stalled out following a brief intraday push higher, with the DXY index trading slightly above the 93 handle early Thursday morning. US government bond yields moved higher across the curve as investors continued to ditch the safe-haven instruments. The yields on short-maturity tenures outpaced the rise seen on 10- and 30-year Treasuries, potentially signaling some repricing on expectations of a less dovish Federal Reserve as the economy continues to heat up.

The US economy is on the way to receiving another injection of stimulus, this time through a massive infrastructure spending bill. President Joe Biden outlined that plan from Pittsburgh, Pennsylvania, shortly after the NY closing bell rang. The American Jobs Plan was the focus of the speech. Mr. Biden said the plan will aim at repairing, updating, and improving America’s infrastructure while boosting jobs growth. So far, GOP support remains elusive but strong advocacy from labor union groups will likely persuade moderate Republican opinions. 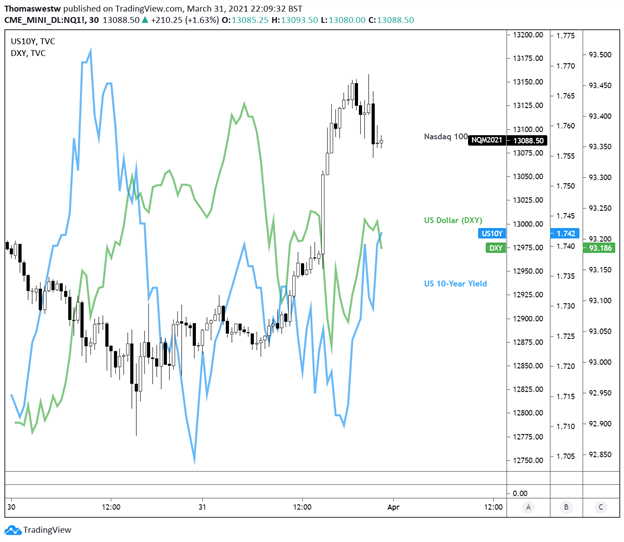 The upbeat session on Wall Street and President Biden’s infrastructure speech, which appeared to add pressure to the Greenback, may help lift APAC equity indexes. Wednesday’s session in Japan prefaced today’s Wall Street performance, when financial stocks dragged the Nikkei 225 0.86% lower, along with a 1.21% move lower in the Topix.

Thursday’s economic event calendar presents several opportunities for event risk from Australia to South Korea. Australia will see trade data, home investment, and retail sales figures for February cross the wires. Manufacturing PMI and trade data are on tap for South Korea, while India will also release its balance of trade for March. According to the DailyFX Economic Calendar, Australia’s February balance of trade is expected to print at A$9.7 billion following a big A$10.14 billion print in January.

The Australian Dollar may get a boost against its major FX peer currencies should its economic prints come in better-than-expected. Against the US Dollar, however, AUD/USD continues to struggle, as rising Treasury yields help underpin the world’s most traded currency. The Australian Dollar’s fundamental backdrop has been weakening as fiscal concerns in the country run up against a central bank that holds nearly half of the debt issued to stimulate the economy over the past year.

AUD/USD’s Head and Shoulders pattern remains in play as the currency pair’s price clings to the neckline of the trend reversal pattern. Joined by the 0.7600 psychological level, a break lower would likely give way to an extended selloff. A late 2020 price floor at 0.7517 and the 200-day Simple Moving Average (SMA) may serve as likely price targets if that breakdown occurs. Alternatively, recapturing the overhead 100-day SMA may help regain some bullish momentum in the short term. 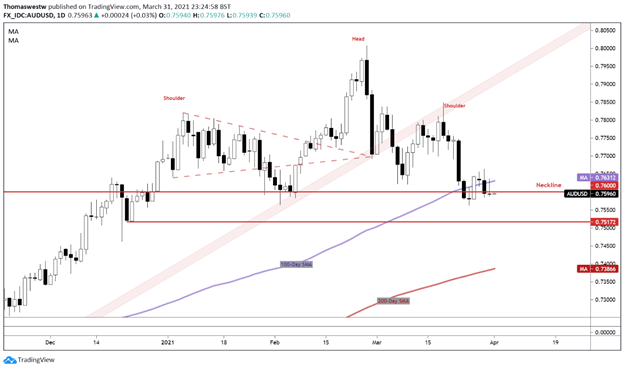