Wall Street rose into record highs Thursday, led by the tech-heavy Nasdaq Composite, closing 2.56% higher. The other major indices followed, with the Dow Jones, S&P 500, and Russell 2000 climbing by 0.69%, 1.48%, and 1.89%, respectively. The Greenback, meanwhile, is seeing an uptick after the US Dollar Index (DXY) nearly broke below the 89.2 handle on Tuesday.

The fresh record highs across U.S. indexes are hardly outside the market’s recent convention. Yesterday’s clash at the U.S. Capitol was brushed aside by investors, although order was restored long before the opening bell. Instead, investors focused on the much improved chances for increased fiscal stimulus this year after the Georgia runoff elections secured Democrat control of the Senate, and therefore the whole of Congress, after The Associated Press reported Jon Ossoff’s victory.

U.S. government bond yields skyrocketed in reaction to the chances for increased fiscal aid to combat the ongoing Covid-19 pandemic, which will likely be one of the first measures introduced under the incoming administration. The expectations for more stimulus translate to an increased debt burden financed through Treasury issuance, along with increased inflation bets. The 10-year yield traded near 1.076% after the New York close. 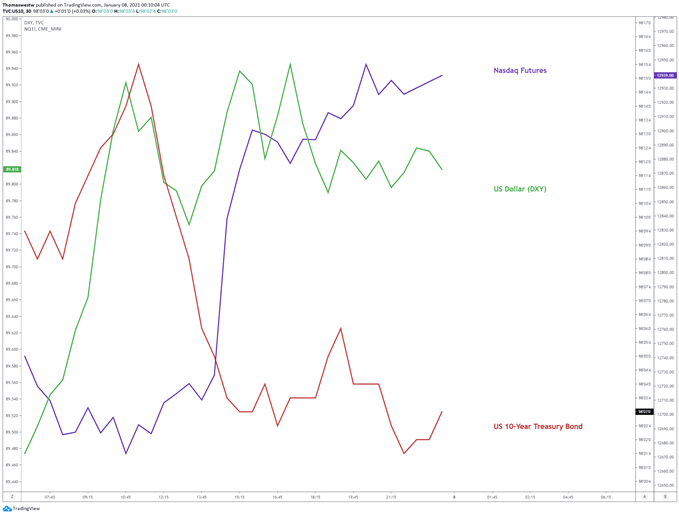 The Australian Dollar eased against the US Dollar, likely due to rising Treasury yields and a fundamental strengthening of the Greenback due to the aforementioned political implications from Wednesday’s election results. A stronger Greenback may hurt the Australian economy through its commodity export channel. All else being equal, cheaper commodity prices may reduce profits. Having said that. AUD/USD appeared ripe for a short-term pullback following a strong rally over the past few weeks.

Thursday’s trading in equity markets may see a spillover from optimism seen in U.S. trading as the world’s largest economy appears to be on a clear path towards further stimulus. Economic data gives little chance for any event risks, with the DailyFX Economic Calendar showing only figures from Japan in the form of its coincident index and leading economic index. Traders will be watching for tomorrow’s non-farm payrolls report out of the United States, with 71k jobs expected to be added for December.

As previously mentioned, the Australian Dollar is pulling back versus the US Dollar, but the move does little to threaten the broader rally in AUD/USD. The current technical picture sees prices falling back within the upper Bollinger Band after a sharp rise earlier this week pushed the sentiment-linked cross into fresh multi-year highs.

The RSI oscillator remains in overbought territory, slightly above the 70 level but trending lower on today’s pullback. In line with recent action, a return to the 9-day exponential moving average (EMA) may occur before resuming the move higher. Moreover, a stronger pullback would see the 20-day Simple Moving Average provide a possible turning point. Below that and a December 2019 trendline may provide support. 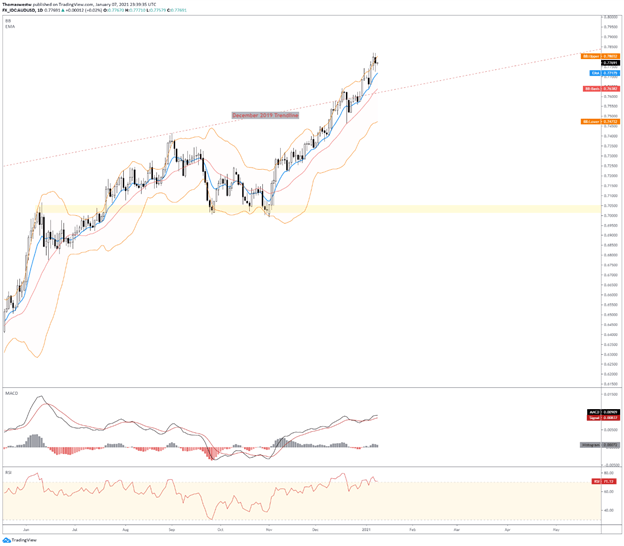