63 DAYS UNTIL THE US PRESIDENTIAL ELECTION

With just two under months until the US presidential election, polling data continues to show a somewhat ambiguous picture. As a result, market volatility from these polls have remained somewhat muted. Having said that, the betting average between US President Donald Trump and Democratic candidate Joe Biden is showing a reversing trend. In light of this, what is the next major event markets should be looking out for? 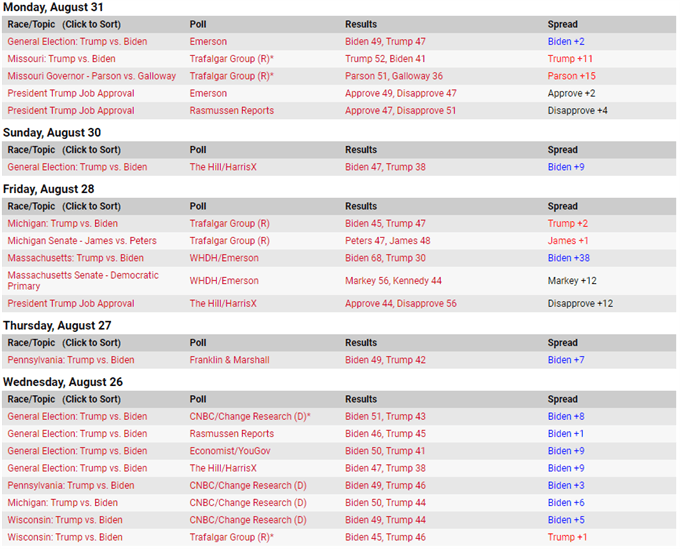 The next major election-related political event to monitor will be the Presidential debate on September 29. According to Pew Research, the first debate between former Secretary of State Hillary Clinton and Donald Trump in 2016 drew a record 84 million views. This beat what was up until that point the debate between Carter and Reagan in the 1980s that drew 80.6 million views.

While the debates themselves do not necessarily determine how citizens will vote, it has been shown to be a useful input when people cast their ballots. Leading up that point, polling data may begin to generate some politically-induced volatility if the polls show a consistently narrowing or significant widening Trump-Biden spread.

Compressed uncertainty leading up to the event could curb US Dollar losses if the geopolitical ambiguity puts a premium on haven-linked assets. As the election draws closer, this dynamic could become more amplified. Given Mr. Trump’s policy approach to China, the Australian Dollar in particular may become more vulnerable. For additional political updates, be sure to follow me on Twitter @ZabelinDimitri.

AUD/USD is trading just below the December 2018 swing-high at 0.7393 after clearing a key obstacle at 0.7295. However, recent price action indicates an underlying lack of confidence, as noted by the small-bodied nature of the candle, combined with its long wick. Another close below 0.7393 with follow-through could catalyze a short-term pullback if traders believe that at this time the pair cannot clear the key ceiling. 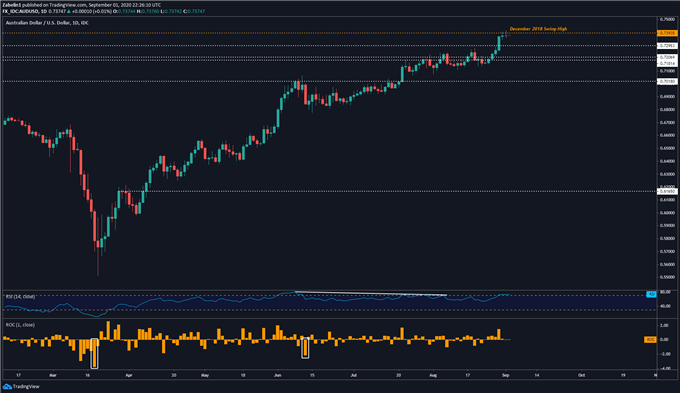