Gold Price Outlook: XAU/USD Consolidating Ahead of Day 4 of RNC

67 DAYS UNTIL THE US PRESIDENTIAL ELECTION

The spread between President Donald Trump and Democratic nominee Joe Biden has narrowed as we head into the final day of the RNC. Polling data generally shows Mr. Biden in the lead, though the difference among various agencies ranges from as low as 1 point to as high as 9. RealClearPolitics general election polling data as of August 26 shows that the spread between Trump and Biden has narrowed to around 7 points. 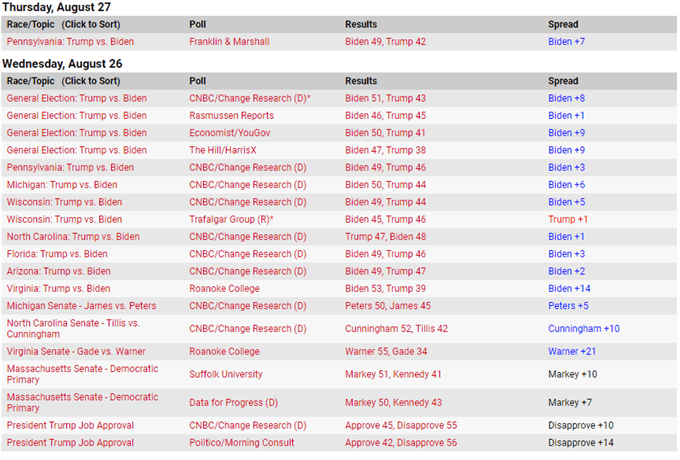 Content in terms of economically-oriented policies was relatively sparse. As such, the market reaction appeared to be relatively muted. The speeches included talks about the riots from social unrest and the emphasis of a well-known Republican idea – going back to Richard Nixon – of law and order. The campaign then used that to shift the focus and narrative of a choice between prosperity and disorder, between Trump and Biden.

The final night of the 4-day Republican National Convention will be closely scrutinized as Mr. Trump prepares to deliver his outlook for a second term. The lineup for the final day includes well-known figures like Senate Majority Leader Mitch McConnell, House Minority Leader Keven McCarthy, former New York city mayor Rudy Giuliani and the President himself.

Trump’s speech in particularly may add additional pressure to what is an already geopolitically-uncertain environment. Rhetoric on inward and outward-facing economic policy, particularly as it relates to cross-continental trade relations – may rattle markets. Tension with China remain high with the “Phase 1” trade deal check-in rescheduled indefinitely and uncertainty about the future use of auto tariffs against Europe.

This comes as the spread between Biden and Trump has been narrowing over the past few days. Concern about another four years of unconventional economic policies could spark demand for havens and push the US Dollar higher. Consequently, gold prices may turn lower on account of not only a strong Greenback but a quick burst of renewed demand for liquidity.

Recommended by Dimitri Zabelin
What Is The Road Ahead For The US Dollar?
Get My Guide

XAU/USD appears to be a consolidative process after rallying up a storm following its break above a critical inflection point at 1810.33. The symmetrical nature of this pattern may hint that a resumption of the prior uptrend is in play. Having said that, the layered shelves of resistance that have developed since topping at 2069.77 creates a new series of obstacles gold prices have to clear. A downside breakout is not improbable. 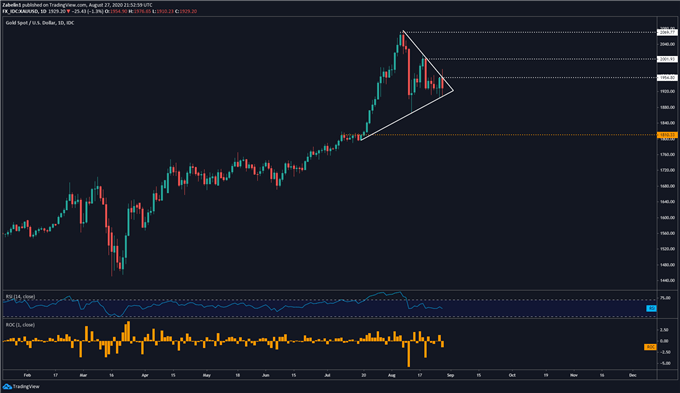