The sentiment-linked Australian Dollar and similarly-behaving New Zealand Dollar were some of the best-performing major currencies on Thursday. Most of their gains occurred during the Asia Pacific and European trading sessions as risk appetite improved. Upside momentum faded during the North American session as the Dow Jones and S&P 500 closed +0.17% and -0.05% by the close, respectively.

Sentiment deteriorated after reports crossed the wires that Gilead’s antiviral drug – Remdesivir – failed its first trial for coronavirus patients. One week ago, markets soared as the biotechnology company first noted the drug’s potential impact on COVID-19 patients. The report did caution that there was a lack of a control group which made “interpreting the results more challenging”.

Elsewhere the Euro was one of the worst-performing G10 currencies after a slew of dismal Euro Area PMIs crossed the wires. Further compounding regional growth fears was the EU summit ending without an agreement on a stimulus package. The US Dollar was relatively mixed as investors largely brushed aside disappointing US PMI figures for April which plummeted in the worst decline on record.

S&P 500 futures are pointing cautiously lower heading into Friday’s Asia Pacific trading session. This is despite the Federal Reserve announcing further measures to increase intraday credit availability and the House passing the threshold to pass a $484 billion stimulus package. As these updates were released, Google announced a sizeable decrease in marketing budgets as Boeing hinted at cutting jobs on plunging demand.

US President Donald Trump did mention that he could extend distancing guidelines until the Summer during his press conference today. A combination of these developments could have resulted in market sentiment fading despite US virus case growth slowing to its softest pace this month. Further hesitation from investors could spell a mixed session in the coming hours.

AUD/USD continues to consolidate after prices broke through key rising support from March’s bottom – parallel pink lines on the 4-hour chart below. Key resistance sits at 0.6385 while support at 0.6250. A push above the former exposes the current April high at 0.6445 while a turn lower risks paving the way for a reversal of the uptrend from last month. 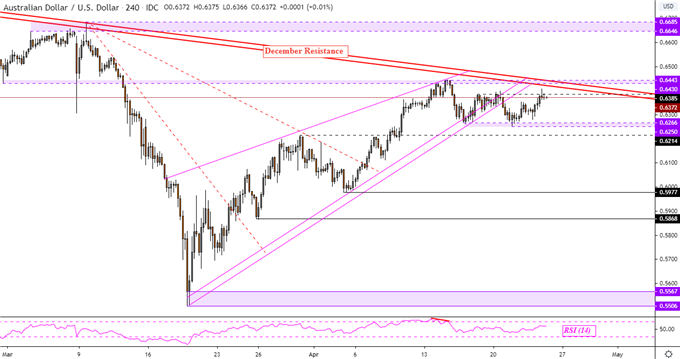