British Pound, Euro and Japanese Yen Outperform the US Dollar as Stocks Tumble

The British Pound, Euro and anti-risk Japanese Yen were some of the best-performing major currencies on Tuesday. Market mood continued to aggressively deteriorate in the wake of the coronavirus outbreak. The S&P 500 dropped 3.03 percent over the past 24 hours, bringing its total decline from last week’s peak to over 7.6%. The Dow Jones fell 3.15% as Wall Street extended the slump.

As Wuhan virus cases increased in countries such as Japan, Italy and Iran, the U.S. Centers for Disease Control and Prevention (CDC) announced that a pandemic is now likely. Meanwhile local consumer confidence data missed expectations, rising much less than expected to 130.7 in February from 130.4 prior. As a result, the markets are increasingly pricing in a more-dovish Federal Reserve.

Fed funds futures now indicate that a third rate cut by the end of this year is hovering around a 40% probability. Expectations that the US Dollar may greatly see its yield advantage against the British Pound and Euro erode likely paused some of the aggressive gains it has experienced as of late. However, do not underestimate its status as the world’s reserve currency which may come back to offset near-term declines.

The economic calendar docket is fairly light heading into Wednesday’s Asia Pacific trading session. That will likely place the focus for foreign exchange markets on risk appetite. Much like yesterday, S&P 500 futures are pointing cautiously higher which may result in some consolidation in regional bourses. Keep a close eye on updates from South Korea on new coronavirus cases which temporarily lifted stocks yesterday.

On the daily chart, even though the British Pound aimed higher, GBP/USD may still be in a near-term downtrend from December. A potential falling trend line from the peak on December 13 may be keeping the bias lower. That may pave the way for another retest of key support which is a narrow range between 1.2850 to 1.2877. Otherwise, turning entails taking out the trend line and 1.3069. 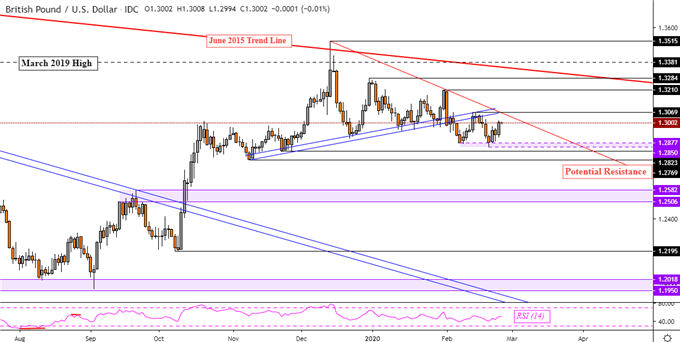